"When I went into a library and saw the Guinness World Records book, it was a light shining on it in the shelves," recalled Yuko Matsuzaki. "It was like a golden book. I had to read it. Even as a young girl - maybe 7 or 8 years old - I wanted my name to be in this great book of world records. It was a book that I read from cover to cover when I was a kid."

Matsuzaki, originally from Tokyo, Japan, continued to dream as she became a fin swimming champion and was later inducted as an Honor Swimmer in the International Marathon Swimming Hall of Fame for her prolific career in the sport. 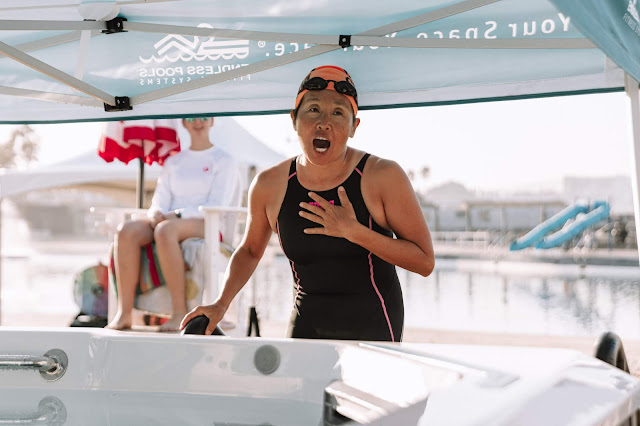 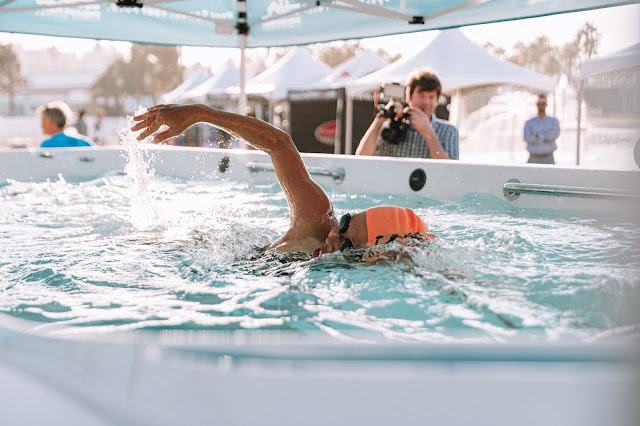 "I was doing well as a fin swimmer, but then I had a chance meeting with Paul Asmuth [shown below]. He was a [7-time] world champion in marathon swimming and he encouraged me to try marathon swimming," she explained. She tried it and fell in love with the sport where competitive races up to 88 km consumed her. "I absolutely loved it. I was always the only swimmer from Japan, so when I competed in races in Italy, Argentina, Greece, Brazil, France, Canada, Serbia and the United States, the sponsors and race organizers always asked me to support them and promote the race.

It was wonderful being around these great marathon swimmers, traveling across the globe, and doing something that I love."

She was later honored by the prestigious International Marathon Swimming Hall of Fame - but getting into the Guinness World Records still remained on her mind for decades.

Finally, an unexpected opportunity came up - at the age of 57 - for Matsuzaki to realize her dream. She set off to break the Longest continuous swim in a counter-current pool of 16 hours in an official Guinness World Record attempt at the 2019 WOWSA Ocean Fest in Seaside Lagoon in Redondo Beach, California. Watkins Manufacturing installed its signature E500 Endless Pool on the beach and her attempt was set.

"Only when I got to Redondo Beach did I learn that it takes time for the pool to warm up so we delayed the swim start by one day," she said. So she set off at 8:00 am on Saturday, October 5th.

"She immediately got into her 'all-day pace', but I sensed something was a little off," said observer Steven Munatones. "She could swim all-day in a lake, sea, river or ocean, but it was an entirely different form of swimming in place at a constant pace. It requires a lot of concentration and focus to stay precisely in the middle of the Endless Pool's counter current. I think it is harder than even running on a treadmill or cycling on a stationary bicycle. She was looking down constantly at the same Endless Pool logo and could not see much of anything around her as she continued to swim. 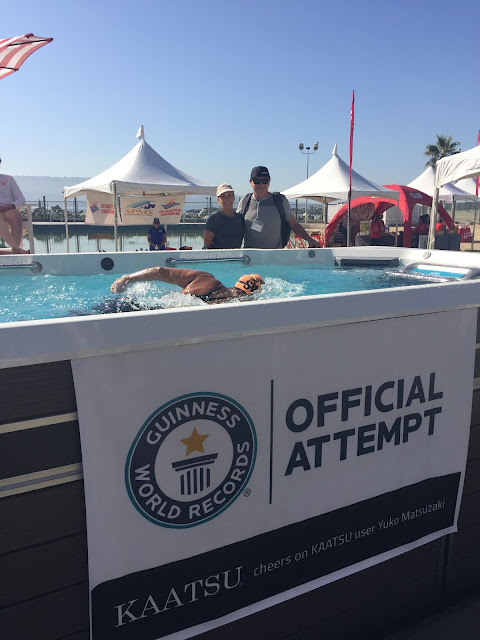 Munatones recalled, "Yuko started at a comfortable 1 minute 55 second pace per 100 meters in the Endless Pool. She got into a groove and continued hour after hour without stopping.

Under the official Guinness World Records rules, she could rest, eat and go to the bathroom for up to 5 minutes per hour.

Most of her rest stops were between 4 - 5 minutes, but she never once got out of the pool. During her rest stops, she mostly stretched, but she also ate some amounts of Japanese rice porridge, chocolate bits and banana slices. She really did not drink much water or fluids, which concerned everyone, but she explained that she never was much of a drinker during her marathon swims."

Gradually, she slowed down her pace as her rhomboid muscles in her upper back between her scapula became painful, especially on her right side. Despite the constant rhomboid spasms that she was experiencing, she continued to swim.

By the 14th hour at 10 pm, the pain became unbearable. She started to swim only with her left arm as her right arm hung at her side. She kept her kick up and soldiered on. After her 11:00 pm break, she started to swim breaststroke. "I cannot remember when the last time I swam breaststroke - at least 40 years ago," recalled Matsuzaki.

Chieko Smith and Chris Morgan were serving as observers and late-night support team. They were cheering her on and trying to put a light mood in the situation as midnight approached. "I was constantly writing messages on a whiteboard so she could read as she turned her head to breathe on her left side," said Smith. "Josef Köberl, a fellow Guinness World Record holder and famous ice swimmer, also stayed through the night supporting her - it was really something to see these record holders support each other." 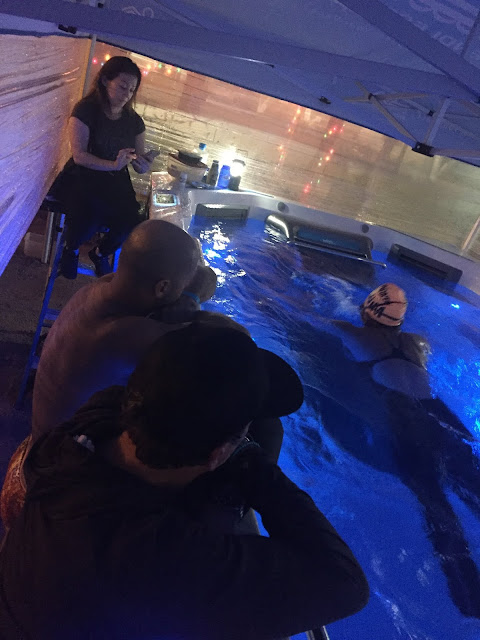 "But late at night with few fans, it is very tough mentally to keep on swimming," Munatones explained. "There is the pain that she was feeling first on her right side and then the pain expanded towards her left side. Within her own thoughts, she had to face this excruciating discomfort in the darkness."

Finally, Chris decided to do some KAATSU the original BFR and its patented KAATSU Cycle mode on her arms during one of her rest breaks. "Yuko has been doing KAATSU Aqua for years. It helps her sleep and helps relieve some of the pain in her shoulders, so we decided to put the KAATSU Air Bands on her as she stopped and was eating some chocolate."

"I felt immediate relief so I started back up freestyle again, but we were still 8 hours from reaching my 24-hour goal,' Matsuzaki said later.

Matsuzaki gradually slowed down to 3:22 per 100 meters as she did mostly breaststroke with an occasional 5-10 minutes of freestyle over the last 8-hour stretch of swimming. Smith recalled, "She got a bit of adrenalin when she passed the 16th hour to break the existing record.

Then her long-time marathon swimming friend Shelley Taylor-Smith really got her pumped up. Shelley, a 7-time professional marathon swimming champion, knew how Matsuzaki was feeling and she knew exactly what to do. She smiled at her, cheered, and kept on writing inspirational messages to her. We all could immediately see the impact of Shelley's presence. Yuko immediately picked up her speed and improved her mindset."

Munatones agreed, "Yuko was always in a great mindset, but she was hurting big-time. I was really worried and did not think she would make it to 24 hours. But Shelley was great. Shelley really knows how to transform the mindset of a tired and frustrated marathon swimmer. Without Shelley and Chieko and Chris doing KAATSU, I doubt Yuko could have made it through the night. Each of them, in their own way, pulled Yuko out of the depths and helped her continue swimming."

But it was not easy. Matsuzaki started to hallucinate, as do many marathon swimmers when they approach or exceed 24 hours in the water. Matsuzaki asked her team around 2 am, “Do you see the sea lions?“ 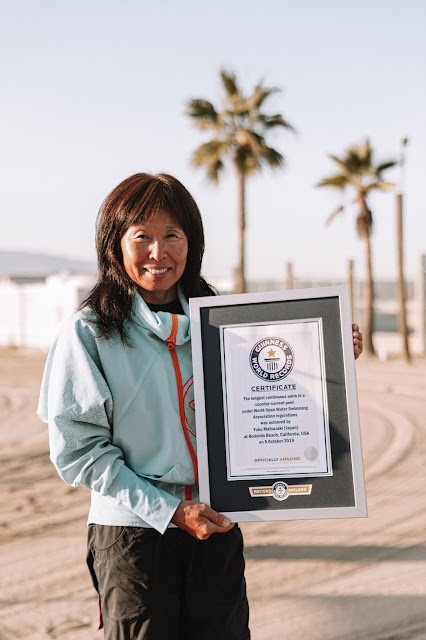 Despite imaging playful sea lions, scary sea dragons and menacing coral worms that were sharing the Endless Pool with her, Matsuzaki kept her cool throughout the 24-hour stationary swim.

"So many people worked on this project with me including Mark Lutz, Aimee Soto and Nick Kale - and then everyone from the City of Redondo Beach from the Mayor Bill Brand to channel hero John York. I could not let any of them down - I had to keep swimming despite the pain. This was my one chance to set a world record - this was just one day of my life and I had to make it worthwhile. I have done other 24-hour swims in addition to a 33-hour swim in Lake Cane in Orlando, but this was really hard.”

By daybreak, Matsuzaki was in her final stretch and into a groove. By 6:00 am just before the sun rose, more and more fans had gathered in Seaside Lagoon and were cheering her on. People were taking photos and videos and posting it online - and Matsuzaki was taking it all in. "I was so looking forward to the final countdown."

Over the last 20 minutes, hundreds of spectators had surrounded the pool and then final countdown began. When it was finished, Matsuzaki took photos with and showed everyone the wrinkled skin on her hands.

It was a dream come true.