KAATSU at the 36th World Congress of Sports Medicine in Athens, Greece 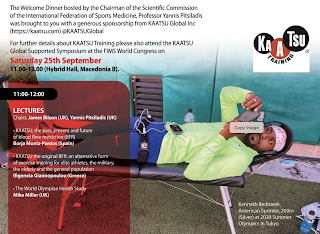 The 36th World Congress of Sports Medicine is currently being held on September 23rd - 26th in Athens, Greece and includes presentations on KAATSU, the pioneer of BFR therapy.

The Congress, organized by the International Federation of Sports Medicine / Fédération Internationale de Médécine du Sport (FIMS), may be watched virtually via www.fims2020.com.

Under the motto of Sports Medicine promotes active lifestyle, the focus will be on genetics, molecular biology, sports, and wearable technologies, including KAATSU Global products. Presentations on anti-doping, sports medicine advances in obesity and diabetes treatment, nutrition, metabolism and exercise, sports cardiology, KAATSU, and the impact of COVID-19 pandemic are scheduled.

● Professor Borja Muñiz-Pardos of the University of Zaragoza: KAATSU, the past, present and future of blood flow restriction (BFR)
● Dr Ifigeneia Giannopoulou of the University of Brighton: KAATSU: an alternative form of exercise training for elite athletes, the military, the elderly, and the general population
● Mike Miller, CEO of the World Olympians Association: World Olympian Health Study 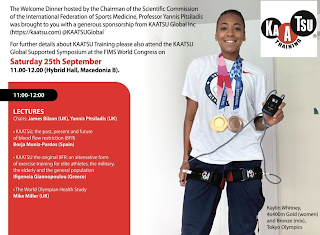 “After inventing KAATSU Constant in 1966 and the KAATSU Cycle principles in 1973 in Japan, we have launched decades of academic research. I am humbled that Doctors Pitsiladis, Muñiz-Pardos, and Giannopoulou from the University of Brighton are presenting KAATSU at this prestigious conference to the world's leaders in sports medicine,” said Dr. Yoshiaki Sato, the inventor of KAATSU.

Retired U.S. Navy SEAL Captain John Doolittle explains, "We were able to meet the professors and explain KAATSU first-hand before the pandemic hit last year. Then, under the direction of Professor Pitsiladis, they used and tested the KAATSU equipment - as did Mike Miller of the World Olympians Association, and dozens of active and retired Olympians throughout Europe, Asia, and the Americas. They understood the mechanism, applications, and the future potential for KAATSU while we were quarantined during the pandemic. 11 KAATSU users stood on the awards podium at the 2020 Tokyo Olympics & Paralympic Games which was great to see.

Concurrently, we are widely expanding its use with the U.S. military and our fastest growing demographic: women and men over the age of 50. The future of expanding KAATSU to many more athletes and people of all demographic groups around the world is very bright."

About Borja Muñiz-Pardos, PhD
Borja Muñiz-Pardos, PhD is a senior research fellow at the FIMS Collaborating Centre of Sports Medicine at the University of Zaragoza in Spain. His research centers on human performance with a focus on sports integrity and the investigation of ergogenic aids such as sports drinks, brain stimulation, altitude training, doping with erythropoietin, blood-flow restriction training and wearable technologies. His research on the physiological and metabolic responses of blood-flow restriction training and its effectiveness as a training and rehabilitation modality is conducted in partnership with the World Olympians Association.

About Ifigeneia Giannopoulou
Ifigeneia Giannopoulou, PhD is a Senior Lecturer in Sport and Exercise Science at the University of Brighton. She was a Lecturer in Applied Physiology at Strathclyde University and a Lecturer in Exercise Physiology and Sports Nutrition at the University of Athens. Her research is focused on the effects of exercise and diet on health, specifically on abdominal obesity and chronic low-grade inflammation and on clinical populations such as obese individuals, type 2 diabetes patients, and peri- and post-menopausal women.

About Mike Miller
Mike Miller is the first Chief Executive Officer of the World Olympians Association, a group of over 100,000 retired Summer and Winter Olympic athletes who promote the Olympic ideals, educate against doping and drug use, and serve as positive role models. He was the former Chief Executive Officer of the International Rugby Board, overseeing 3 highly successful Rugby World Cups. He also served as the Head of Sports at Channel 4 UK and the Controller of Television Sport at the BBC, and as a member of the European Broadcasting Union Sports Group Executive Bureau. He sits on the Advisory Board of the World Academy of Sport.