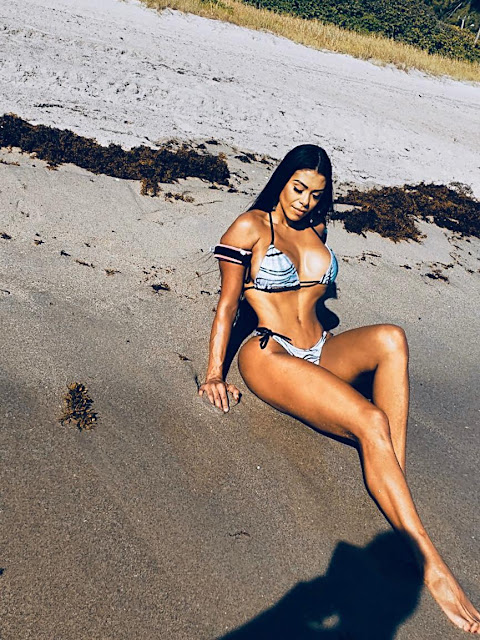 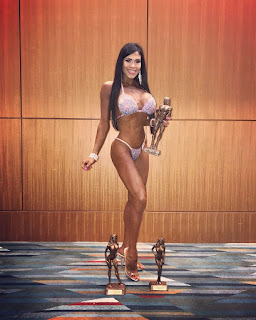 Her achievement is certainly admirable, but it pales in comparison to her life journey, her drive to overcome adversity, and the unique training protocol she developed in the process.

Leidy grew up in the slums outside of Cali, Colombia where food was scarce, the roof leaked, and her dreams of becoming a competitive athlete were far from anything remotely possible. The food that was available was mostly corn based or fried meat. As a result, she was overweight as a child. Leidy was raised by her grandmother and did graduate from a local school at 16 years old, but she became pregnant that year.

At 17, she found herself sharing a room with a relative in Cali and raising a newborn child. With help from relatives, she worked two jobs to make ends meet.

Then, two years later, Leidy was shot by robbers. Her right arm was shattered and had to be reconstructed with metal plates. The future seemed bleak.

The next year she met her first husband who was visiting Colombia. They married and moved to Florida. Her life was still tough. She worked 10 hours a day cleaning houses and gyms including the home of the gym owners. While cleaning the owners' house, she noticed many trophies for bikini body sculpting and dreamed of winning competitions. During her off time, she began to work out at a local gym.

After getting divorced six years ago, Leidy met her soul mate David Weinstein who she eventually married. En route to delivering their baby, Leidy gained a lot of weight – over 100 pounds (45 kg). When their baby Natasha was born, Leidy tipped the scales at 250 pounds (113 kg). To make matters even worse, the plates in her arm - from her gunshot wounds - broke during the pregnancy and she could not use her left arm as a result.

The surgeons said that there was a 75% chance she would never be able to use her left hand again and she would only have limited use of the arm. After a seven-hour surgery, they were able to reconstruct her nerves and put in new plates. Her husband recalls, "We waited, but an hour after she awoke, Leidy was able to move her hand. She needed yet one more surgery 3 months later before she would be allowed to exercise."

One day in the summer of 2016 while she was recovering, Leidy proclaimed that she wanted to help women lose weight and take control of their health. She decided the best way to help others was to lead by example. She embarked on a path that day with a vision – to lose 100 pounds, sculpt her body, and win a bikini championship. "It was a nice dream in search of an action plan," says David, an entrepreneur in the fields of medicine and biotechnology, who established a new company called LifeForceIQ in Boca Raton, Florida [see below].

Her original plan came from LifeForceIQ. David explains, "LifeForceIQ takes a radically different approach to optimizing health and vitality. It approaches each person by transforming their health biologically, one cell at a time. The equipment and training protocol combines the Japanese blood flow modification system called KAATSU with TRX, light weights, infrared sauna, and LiveO2. Additionally, she ran blood tests for food allergies and then grew organic vegetables, bought grass-fed beef from Montana, and wild salmon from Alaska."

David describes her typical daily training. "Upon waking at 5:30 am, Leidy spends the first 30 minutes in prayer, thanking God for all she has and asking him to assist her in helping others. Then she takes LifeForceIQ supplements to increase nitric oxide and oxygen delivery to her muscles and physique in order to gain lean muscle mass, reduce body fat, and increase strength as well as Rejuvenation to selectively reduce oxidation.

She washes them down with Fat Transformer which provides and energy boost and increases metabolism. The power of these supplements in that they work synergistically with a KAATSU circuit, TRX, and cycling with LiveO2.

We wanted to learn from the inventor of KAATSU so we traveled to Tokyo in order to learn from Dr. Yoshiaki Sato [see photos below]. Our initial session was intense." 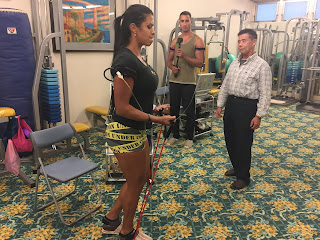 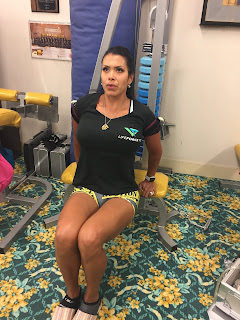 "She listened to Dr. Sato's advice and followed his protocols to the letter," observed KAATSU Master Specialist David Tawil who participated in the initial session with Leidy. "Leidy was pumped psychologically and became so physiologically toned - ripped - it was unbelievable."

Dr. Sato started Leidy with several KAATSU Cycles, gradually increasing her Optimal Pressure from 150 SKU to 300 SKU on her arms. "Leidy's skin gradually started to get pink and then became a healthy glow of red by the end of several KAATSU Cycles," said Tawil. "Then Dr. Sato went from the KAATSU Cycle modality right into KAATSU Training when he untethered Leidy and did a variety of short exercises from isometric exercises to triceps extensions on a bench."

Leidy then went into the recovery mode with a finishing KAATSU Cycle. She recalled the experience, "I felt great - like I just had an hour-long workout in the gym. But KAATSU got me to muscular failure within minutes. It is so efficient and effective when the blood is pooled in your limbs."

In her morning regimen, Leidy hits the bike first. Leidy likes to alternate between climbing and riding her Schwinn Blue stationary bike while using the LiveO2 system. The system let her perform a high intensity interval training (HIIT) program while breathing highly oxygenated air to saturate her tissues with oxygen. Every other sprint, she will down regulate the oxygen to high altitude hypoxic training. In this way, her circulatory system expands and contracts. This allows her cells to detox and increase metabolism simultaneously.

After 30 minutes, she will do some stretching or a spend a few minutes on the inversion table. She wraps up the cardio portion of the workout with a Tabata set either with kettle bells of jumping on a mini trampoline.

Then it is time to do an upper body cycle of KAATSU. By running a squeeze and release warmup KAATSU Cycle, the blood vessels begin to vasodilate. Then Leidy fixes her optimal pressure and begins to run three sets of different exercises addressing her biceps, triceps, shoulders, back and pecs.

Both the KAATSU and Blood + Physique supplements increase nitric oxide production which allows oxygen to nourish the body and carry away waste products. Additionally, due to KAATSU, lactic acid is produced and trapped in the veins as the venous flow (blood return to the torso) is modified. Signals are sent from the veins through the central nervous system to the pituitary gland and the brain is alerted that human growth hormone is needed. Growth hormone production increases which optimizes her physique and uses increased energy which burns fat.

On alternate days, Leidy will do KAATSU on her legs either with TRX or weight machines.

Following the morning workout, Leidy takes a 45-minute infrared sauna with red light therapy applied at the end. She alternates the sauna programs for weight loss and pain relief. When finished, it is time for a 5-minute cold shower with aromatherapy. Following this, she downs a green juice cleanse. She rotates her diet between ketogenic protocols and paleo plans that are combined with intermittent fasting.

Her husbands summarizes her day and training, "By the time the morning has started for most people, Leidy has already cooked lunch for the family which is followed by cleaning the house, training clients, and preparing dinner. The evening will be filled with stories about what happened at school, why is the world the way it is, and what can we do about it.

At the end, each day is a blessing and Leidy embraces each day as precious
."


Posted by Steven Munatones at 1:20 PM