Why KAATSU Is The Original BFR 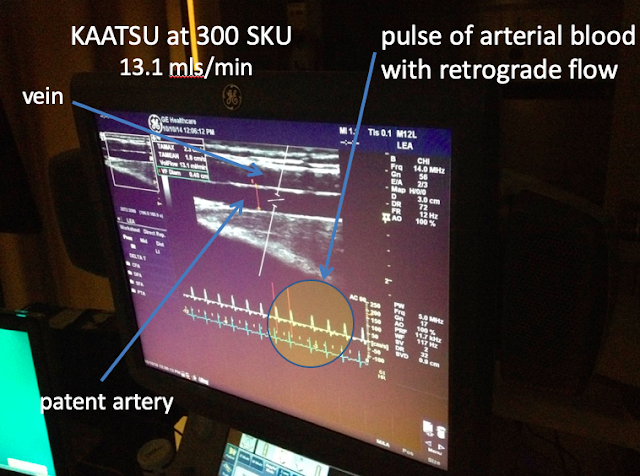 Many people interchangeably refer to KAATSU as BFR and BFR as KAATSU. In fact, KAATSU is the original BFR. This article serves to explain in easy-to-understand, non-medical terms, why these differences and background. KAATSU was the original BFR because the editors of the first peer-review published studies did not recognize the word KAATSU and required that blood flow restriction or BFR was used. That being said, there are differences between KAATSU and BFR from a medical perspective. 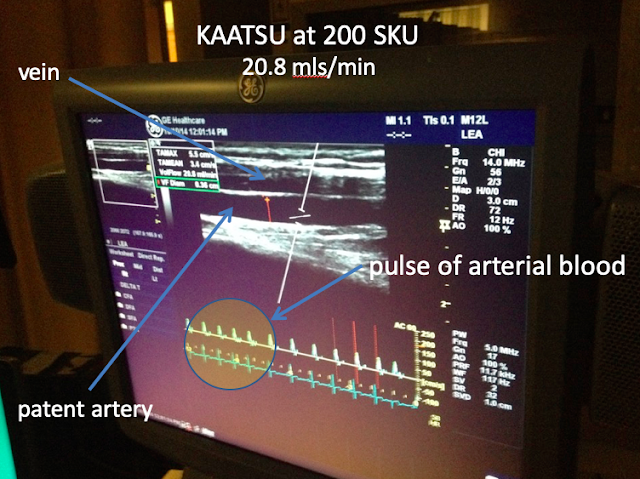 First, let's review the vernacular used for both BFR and KAATSU:

Restriction (noun): something that restricts, an act of restricting, the condition of being restricted from the Merriam-Webster online dictionary

Occlusion (noun): the act of occluding (or close up or block off or obstruct) from the Merriam-Webster online dictionary

KAATSU (or 加圧 in Japanese): translated as additional pressure in English.

Blood Flow Restriction (or BFR): a training strategy that involves the use of blood pressure cuffs, tourniquets or occlusion wraps placed proximally around a limb that maintains some arterial inflow while occluding venous return during exercise or rehabilitation. KAATSU was original defined as such.

Second, how is the pressure in BFR and KAATSU determined?

BFR is commonly started by occluding the brachial systolic blood pressure in the arms or the femoral systolic blood pressure in the legs. Once this pressure, measured in mmHg, is determined, then the BFR bands are set at a certain percentage of that pressure measured in mmHG. In other words, BFR starts by cutting off the arterial flow from the torso to the limbs - and then proceeding with exercise or rehabilitation at a lower pressure.

In contrast, KAATSU starts at homeostasis or the stable state of equilibrium in the body with complete patent (i.e., open) arteries and veins. From this point, the "KAATSU Cycle" is used to very gradually and precisely increase the pressure until an "optimal pressure" for each person and each limb is reached (note: the pressure on each limb can be different if there is an injury or significant difference in limb strength, range of motion, or girth). 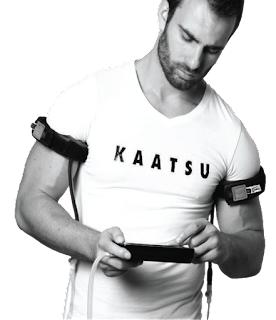 Even when the KAATSU Air Bands have significant air pressure inside them, there is no occlusion of arterial or venous flow [see photos above and read here]. The KAATSU Air Bands are specifically designed to allow this condition to occur even at the highest KAATSU pressure possible.

Decades of trials and testing with different material types, material elasticities, and widths enabled the KAATSU inventor, Dr. Yoshiaki Sato to come up with this innovative design. KAATSU protocols were tested and studied at the University of Tokyo Hospital under the supervision of trained and experienced cardiologists including Doctors Nakajima and Morita. 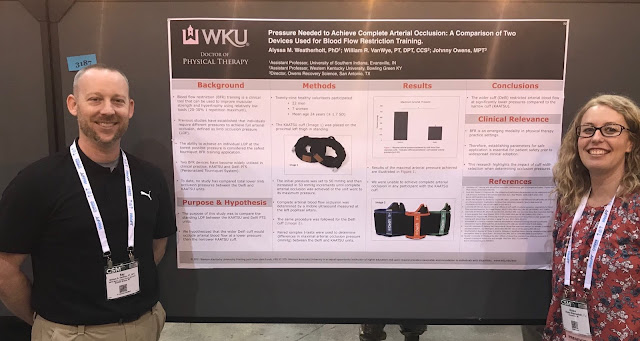 Third, the structure and composition of the KAATSU Air bands are different than all the other BFR and Occlusion Bands on the market today. 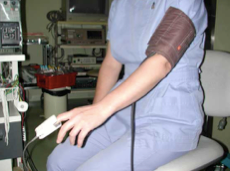 BFR or Occlusion bands are engineered to cut off or restrict blood flow - similar to blood pressure cuffs. Their structure and materials are purposefully designed to achieve this objective. The width of the bands apply a pressure that is effective in reducing or restricting arterial flow. 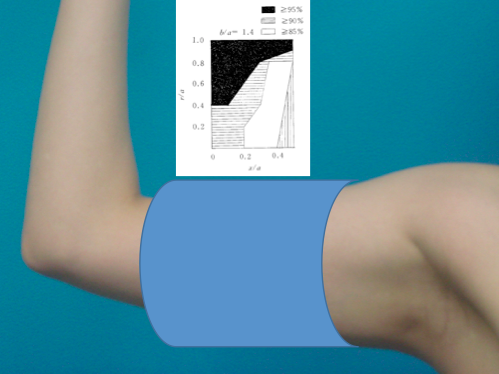 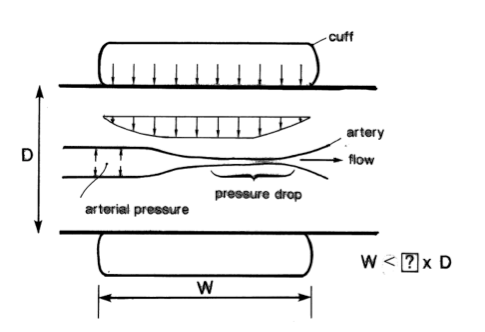 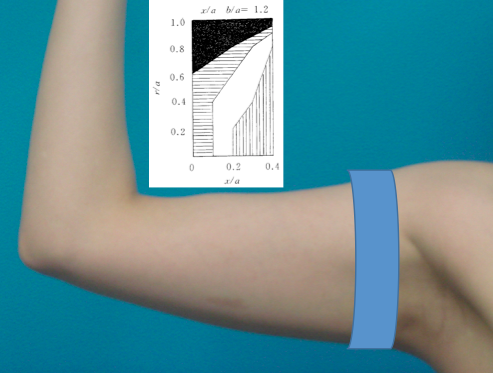 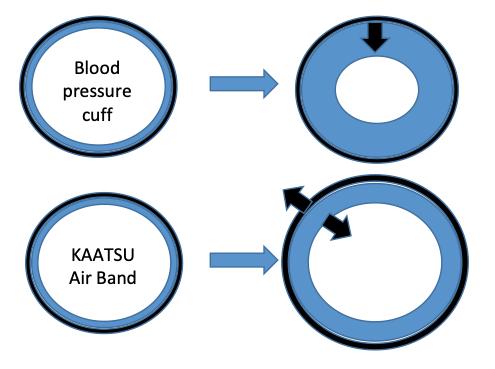 The KAATSU Air Bands gradually apply pressure to the veins. This modifies the venous outflow in the limbs. As the pressure increases during the KAATSU Cycle mode, this modification of the venous outflow eventually modifies the arterial inflow. As exercise or movement continues with the KAATSU Air Bands on, the blood flow into the limbs must soon match the (venous) blood flow out of the limbs. Give about 80% of the body's blood is in the venous system, there is some capacitance for holding extra blood in the limb, and when that capacity is reached, the blood flow in must match the blood flow out of the limb.

Physiologically, exercise becomes unsustainable when light and easy exercises or movement (e.g., KAATSU Walking or unweighted KAATSU limb movements) are conducted with this impeded circulation. The pO2 and pH gradually (or quickly, depending on the KAATSU intensity) drop to critical levels with even mild exercise. Additionally, higher levels of lactate are generated during KAATSU (compared to non-KAATSU exercise). ATP levels drop as the ADP and Pi levels rise, and ATP dependant electrolyte pumps (e.g. Ca++) cannot maintain proper electrolyte gradients. In this state, there are a significant amount of metabolite and hormonal changes and increases that are subsequently realized.

The researchers concluded the wider cuff of the Delfi Portable Tourniquet System for Blood Flow Restriction is able to restrict arterial blood flow at significantly lower pressures compared to the narrow cuffs [KAATSU Air Bands] using the KAATSU Master. The key finding of this study is as follows:

“We were unable to achieve complete arterial occlusion in any participant with the KAATSU cuff.”

The KAATSU equipment is designed and is specifically manufactured to avoid arterial occlusion in the limbs. This fact is precisely why KAATSU was originally defined by Dr. Yoshiaki Sato, the KAATSU inventor, and leading Japanese cardiologists at the University of Tokyo Hospital as a Blood Flow Moderation (BFM) device. KAATSU equipment is specifically not a Blood Flow Restriction (BFR) device.

While the vernacular nuance between BFM and BFR may be overlooked by many (venous flow modification versus arterial flow restriction), the modification of venous flow is critical to understanding the safety and goal of KAATSU, as certified KAATSU Specialists understand.

"There is no part of the KAATSU protocols which tries to achieve arterial occlusion. This is why KAATSU is not BFR, occlusion training, tourniquet training, O-training, or any kind of blood flow restriction modality," explains Steven Munatones. "This is why KAATSU equipment does not use blood pressure cuffs or surgical tourniquets that are specifically designed to occlude, or manufactured to restrict arterial flow. Rather, the stretchable KAATSU Air Bands are designed with flexible, elastic air bladders that inflate inwards, towards the limb, at very moderate pressures to minimally modify venous flow.

This pressure is gentle on the body and uniform, because the limb is evenly and safely compressed by a bed of air. This principle and practical engineered solution leads to blood pooling in the limb - not arterial occlusion. This fact was independently determined by researchers and the leading Delfi proponent of BFR
.

Furthermore, the patented KAATSU Cycle allows normal arterial and venous flow every 20 seconds which means it is safe, effective and gentle for people of all ages (including up to 104 years - see here).

1. The purpose of KAATSU equipment and its protocols is a reduction in venous flow via blood flow moderation, a term first coined in the 1990s by Dr. Sato and Doctors Nakajima and Morita, cardiologists at the University of Tokyo Hospital.

3. When the KAATSU equipment is used, its users agree to follow the specific protocols as defined by its inventor, Dr. Sato. Specifically, KAATSU protocols and equipment are designed not to occlude.

4. The stretchable, pneumatically controlled KAATSU Air Bands are not (blood pressure) cuffs. A cuff is a term that refers to devices specifically engineered for limb occlusion.

Posted by Steven Munatones at 9:11 AM