A Positive Mindset For Brain Surgery 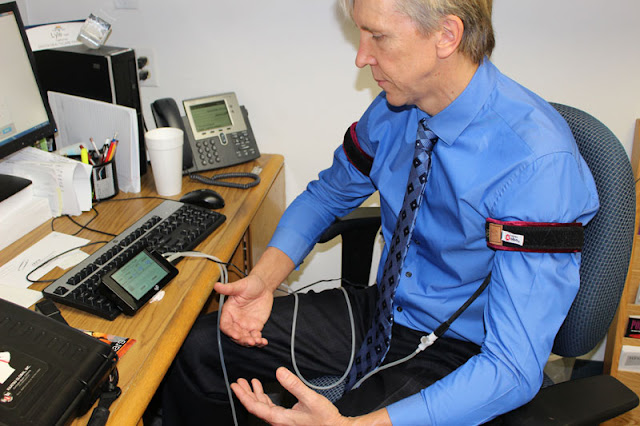 Dr. Lyle Nalli was surprised when his hearing went out after he hopped out of workout one day.

I took a hearing test that showed a loss of hearing, but the doctors did not know why
."

After consulting his colleagues in the medical community, he went in for an MRI. "It was positive for acoustic neuroma (AN), a swelling of the nerve," he recalls. The tumor was 3 mm in diameter and located inside his cranium between the inner ear and his brain stem. "After consultation, there were 3 options: just observe and let it be, gamma knive, and a surgery to excise it. I decided on surgery at the House Ear Clinic in Los Angeles with Dr. Slattery who I cannot say enough positive things about." He decided on an immediate surgery because he felt he was healthy enough to get through the surgery, there was no chance of coming back after excision, and he could eliminate the worry for the rest of his life that the tumor was not getting bigger.

For a man who has been training and racing all his life as a competitive pool and open water swimmer, health was not an issue. Not only has Dr. Nalli been a regular at local events, he has placed at World Masters Championships and was on a world record-setting Catalina Channel relay with his Long Beach Swim Focus teammates. "The nurses and staff nicknamed me The Athlete because my resting heart rate was so low. In the Intensive Care Unit (ICU), my resting pulse of 38 beats per minute kept on tripping the alarm."

Like his open water swims, Dr. Nalli knew the inherent risks, but he had prepared himself as best he could and left the preparations and guidance up to Dr. Slattery. "In surgery, he cut into my skill about the size of a quarter (24 mm) behind my ear. He drilled into my skull and then gave me a spinal tap and drained out the cerebral spinal fluid (CSF). This caused my brain to recede and gave the doctor some slack to work with. Then he made a cut to excise the tumor around the brain stem where the facial nerves, hearing nerves, and balance nerves are located. He cut out the balance nerves and then shaved off a bit of the hearing nerve in order to save my hearing. Six hours later, the benign, slow-growing tumor was out and he patched me all up."

Dr. Nalli's story now becomes one of inspiration and shows the advantages of staying in shape as one ages.

"I was in ICU for 3 days and then I stayed in the hospital for a week total. For the first day and a half, I went in and out of sleep I had a throbbing headache and a sick, sour taste in my stomach for 4 days. It was hard to sleep and I had this strong sense of smell of cat urine and burnt eggs. This taste and smell did not go away for days and I immediately lost 15 pounds while I was in ICU. I lost my sense of balance and my head felt like it was spinning when I did things like try to walk or read or watch TV. Patience and time were what was needed. Even after 7 days, I wasn't able to walk upstairs and listening to music and reading was just tiring. I learned patience."

Fortunately, his healthy body built up over the decades through swimming got about to start healing itself quickly. "I just go around to waiting and watching. This was exactly the opposite from all my experiences in athletics and swimming. Imagine in swimming if a coach asked you to just do nothing in order to get better? But that is what I did."

But time means different things to different people. And Nalli was definitely different.

3 days in ICU, 7 days in the hospital, and on the 18th day after 6 hours of brain surgery, Dr. Nalli ventured back to the pool. He was weak and his muscles had atrophied. He started to use KAATSU to gain back muscle and recover to where he was before.

"After 2 weeks, Dr. Slattery was surprised at my recovery. I had to have help to walk and keep my balance. Once I got back in the pool, I was so elated to even kick. But I felt nauseous when I did a flip turn or even turned my head to breathe. I was very happy to be able to do 25 yards of freestyle, but I mostly did kicking. I was careful and couldn't do flip turns and even breathing side to side was tough. But day by day, I got better and used a swim snorkel. I started out doing 500 yards, then 1100 yards, then 1800 yards." 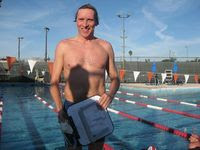 Remarkably, less than 4 weeks from his skull being cut open with a drill, Dr. Nalli had gradually upped his distance to 5000 yards and was regularly doing KAATSU - both on land and in the water.

"I just got in and decided to do a 500-yard swim. Once I was able to do that, I decided to do 1000 yards total [40 laps of a pool]. It is just progression. I am happy that I was healthy before the surgery. The wobbling is getting less intense and the dizziness is going away sooner.

I entered U.S. Masters Swimming Nationals less than a month and competed in the 400 individual medley and distance freestyle
."

Dr. Nalli continued to do KAATSU every day during his recovery. He further augmented his physical therapy with KAATSU Aqua training on a near daily basis as part of his overall rehabilitation in a quest to return to his former swimming speed.

Some of his post-surgery workouts included using KAATSU Aqua Bands on his upper arms and upper legs in the pool, swimming 1-2 laps slowly while building up lactic acid that would normally result if he swam intensely. As his limbs become engorged in blood, he did KAATSU Aqua sets of 25 yards and 50 yards. He did anywhere from 200 - 800 yards in total distance with the KAATSU Aqua Bands as he reached failure when the lactic acid in his arms precluded him from swimming further - and served as a catalyst for a significant hormonal response.

Looking at his sparkling blue eyes and wide smile, his joy in swimming was clearly evident and a credit to his positive mindset and a long life of healthful living.