Swimming Helped Me Survive, KAATSU Enabled Me To Thrive

For who? Heart attack survivors, cardiologists
For what? Cardiac rehab, recovery 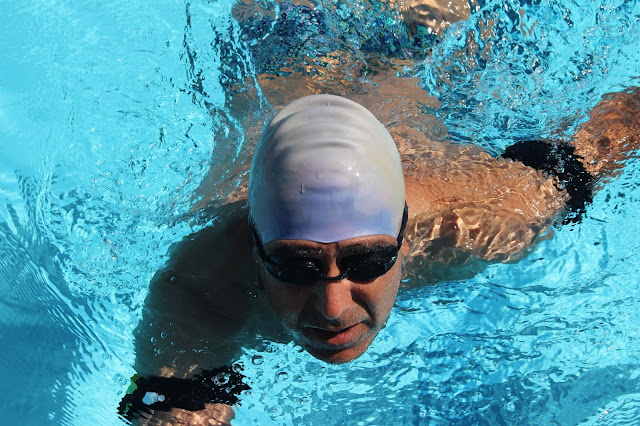 On May 12th 2016, Steven Munatones had a heart attack (i.e., ventricular fibrillation arrest, atypical thrombus, and a myocardial infarction in the left anterior descending artery) at his home. 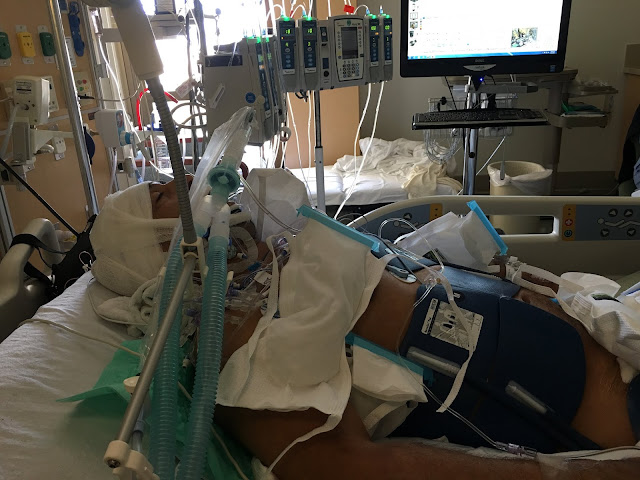 After he awoke from the induced coma, Arctic Sun protocol, and a stent implanted in his left artery and was released from Hoag Hospital in Newport Beach, California, Munatones wrote in June 2016 [here], "Perhaps, I will never get back to that same previous swimming speed and intensity...it may take me a while – perhaps a long time or perhaps never – to have the requisite self-confidence to swim in the Pacific Ocean or to do a fast main set of freestyle or butterfly in the pool. But those limitations – short-term or long-term – are perfectly acceptable to me."

Dial forward three years as Munatones has been doing KAATSU Cycles nearly every day as the primary form of his cardiac rehabilitation.

"I never thought I would get back to my previous level of fitness," the 57-year-old mentioned. "But I have clearly surpassed it. Swimmers can easily and objectively measure one's level of fitness based on the pace and intervals that we swim in a pool. Just recently, I was able to hold a pace of 1:09-1:12 per 100 yards for fifty consecutive 100-yard freestyle swims in a set described by swimmers as 50x100 @ 1:15 in a 25-yard pool. I was not able to do that before.

I have not changed my diet, dryland training, or amount of swimming that I normally do. However, this test set was a clear and objective measure that my aerobic conditioning has improved as I get older - as long as I continue to do daily KAATSU Cycles
."

Munatones described his heart attack that occurred at his home. "I was at my home, heading to the kitchen for breakfast, and I just collapsed. I do not remember anything for 9 days, but on that morning, my 17-year-old rescued me. He did hands-only CPR while my wife was talking to the 911 operators. The paramedics came, took over, and took me to Hoag Hospital in Newport Beach [California].

I was immediately treated by the emergency room staff, operated on by cardiologist Dr. Lee Carter who put a stent in my LAD (left anterior descending) artery. After telling my wife that I would likely have severe neurological damage, they agreed to apply the Arctic Sun protocol. I spent a few days in a hypothermic induced coma and came up in the Critical Care Unit at the hospital. 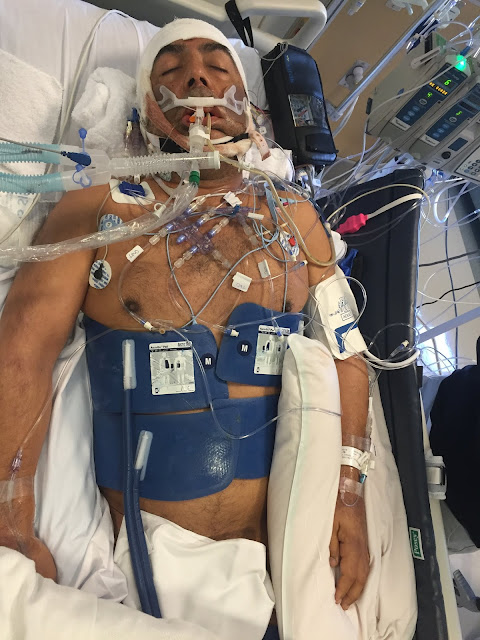 I knew it was a miracle that I lived.

Everything - the timing, the location, the 911 operator, my son, the paramedics, the ER staff and cardiologist, and the circumstances - went just right for me to live. It was a perfect storm of how best the emergency medical system works in America. Everyone involved did an outstanding job in an extremely timely manner to enable me to recover from a heart not beating and lungs not moving, and a brain hovering between life and death.

I am forever grateful for my son and his ability to remain calm and composed as I laid out on the verge of death giving CPR, and the immeasurable skills of the paramedics, nurses and doctors who treated me.

Even before being released from the hospital and returning home, I was intent to getting back to normal as soon as possible. I knew my stress levels and heavy travel schedule had to be significantly reduced to return to a more healthful lifestyle. But I also instinctively knew that swimming and KAATSU absolutely had to become a major part of my recovery.

Swimming is what I have done all my life and KAATSU is something that I had studied how to optimally apply to cardiac rehabilitation patients at the University of Tokyo Hospital under the mentorship of cardiologists Drs. Nakajima and Morita, and Dr. Sato, the KAATSU inventor.

But the learned words of the medical professionals reminded him - and other cardiac patients warned him - about swimming and pushing himself too soon and too hard:

"Take it easy."
"Don't do KAATSU."
"Certainly don't do KAATSU at least for another year."
"Focus on the prescribed cardiac rehab at the hospital."
"Don't get your heart rate too high."
"You need to rest and take it day by day."

Munatones described his dilemma, "I was grateful for the much-appreciated advice of people who had heart attacks and those who treat them as a professional. Since they have the experience and were the medical professionals who saved me, I listened to their advice of course. But I still craved rehabilitating through swimming and KAATSU.

I also wanted to do KAATSU to augment my swimming; I knew that by carefully and gradually inducing blood pooling in my limbs with the pneumatic KAATSU bands, that would be help me. I had spent years being mentored by Dr. Sato, the KAATSU inventor, and University of Tokyo Hospital cardiologists Drs. Nakajima and Morita on how to use KAATSU with cardiac rehab patients, so I was confident in what they taught me.

But I followed directions of my American doctors and very impatiently waited.

Finally, the day came in June when my wife gave me her permission to swim - and I felt that was also the go-ahead day to start KAATSU Cycles. It feel wonderful - and normal - to wake up before the sun rose and drive to the swimming pool in the dark. I could see the lights shining over the pool deck from a distance, a familiar sight. I knew my swimming buddies would park in the same spaces, walk slowly to the pool, and hop in the same lanes...as they have for decades. I knew the warm-up would be the same and the main set would be varied as usual. 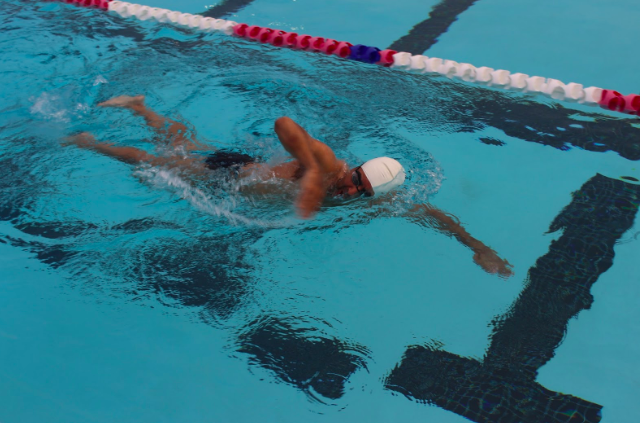 I was under strict directions to keep my heart rate low and swim cautiously. That was not to be a problem. Especially when I just sat on my couch at home or was typing emails at my desk and doing repeated KAATSU Cycles. I knew the metabolic and hormonal responses as a result of KAATSU would help me recover from my heart attack and stent implant in ways that were unknown in the United States 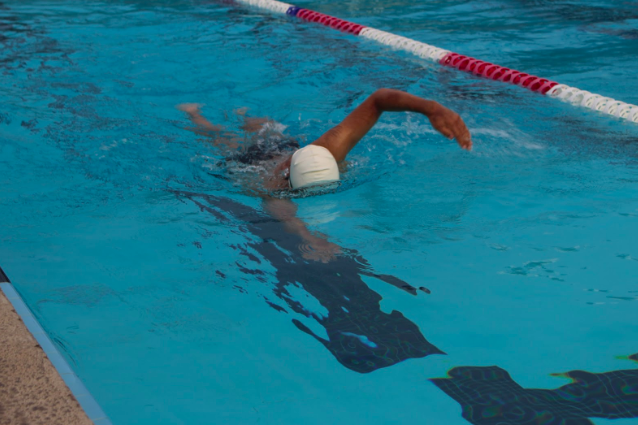 Munatones described how he utilized swimming as a form of cardiac therapy. "I knew that I can easily control my swimming pace and heart rate by the speed of my kick, my stroke rate (arm turnover), my breathing pattern, the length and intensity of my breakouts, and the length or duration of swimming sets in the pool. For example, if I shifted from a 2-beat kick to a 6-beat kick, my heart rate would increase. If I increased my arm turnover, or if I breathed less frequently, or if I performed longer or faster breakouts, my heart rate would also increase.

So control over my swimming pace and heart rate was easy to manage - and I documented everything.

I wanted definitive information about my heart rate so I downloaded Cardiio, the free mobile app created by the MIT Media Lab, to my iPhone. I placed my iPhone next to the pool so I could easily grab it when I stopped to rest at the poolside. I checked my heart rate throughout the workout, but made notes during the main set when I would swim faster.

I also used the Masimo MightySat™ Fingertip Pulse Oximeter to check my pulse, respiratory rate, and heart rate recovery. All this data was invaluable and objective for how I was to conduct my swimming and KAATSU rehabilitation.


Initially during Week 1, I swam very slowly, barely kicking with a purposefully slow arm turnover. I only did open turns rather than flip turns and I stopped frequently. I kept my swimming distance to 2,000 - 2,500 yards (1828m - 2286m) in a short-course pool and was careful to never get out of breath.

During the first five swimming sessions, I kept my heart rate or beats per minute (bpm) to under 110 bpm [see below]. It felt easy and comfortable, but I really enjoyed just being back in the water with my swimming buddies. I also measured the same using the Masimo device while doing KAATSU Cycles at my home. 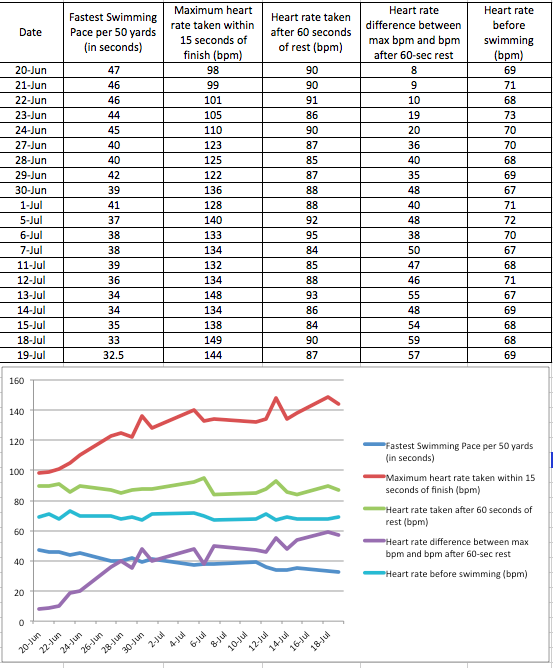 Data from Cardiio, taken by Munatones at poolside

Munatones explained his approach in the pool. "I gradually increased my controlled heart rate to a maximum of 130 bpm during Week 2 and increased it yet again to a maximum of 150 bpm during Week 3 - where the maximum will be maintained for the next six months. I checked my swimming pace after a 2-3 50-, 75- or 100-yard swims, depending on our main set. I made sure to document everything so I could show my cardiologist later. Although I was trained by Dr. Sato in Tokyo, I was not completely sure what data would result and what outcomes would occur - but I had 100% confidence that KAATSU and swimming would ultimately be helpful. To check my recovery, I did pace 100-yard swims to check my speed, pulse and heart rate recovery at the end of each swim practice.

As soon as I finished a swim set, I would stand up on the shallow end of the pool and quickly grab my iPhone to check my heart rate with the Cardiio app or Masimo device. After 60 seconds of rest, I checked my heart rate again. I had hoped that the differential between my maximum heart rate and my heart rate after 60 seconds would increase over time. I saved the data and then posted it on an Excel spreadsheet for future analysis.

During Weeks 1-3, I never got out of breath in the pool like I usually did in our main sets previously to my heart attack. Along with Dr. Lyle Nalli racing alongside me, we would push our pace to maximum exertion levels. But no longer. I was taking my aquatic rehabilitation casually and carefully in a controlled manner.

I am convinced that a lifetime of swimming with all its cardiovascular benefits helped me survive...and I thrived with the addition of KAATSU in my own form of cardiac rehab.

In addition to swimming five days per week, six weeks after my heart attack, I was also concurrently doing KAATSU, primarily on my arms, but also on my legs at least three times per week on dryland. I wanted to start KAATSU immediately after waking up from my coma, but others around me (e.g., wife) encouraged me to wait - and my cardiologist definitely did not even want me to start KAATSU.

Three weeks after my heart attack, I started doing easy and conservative KAATSU Cycles with low pressure regularly on my limbs - administered by myself in the comfort of my own home.

I am convinced that the combination of KAATSU and swimming is the ideal form of rehabilitation for my own cardiac issues. KAATSU allowed me to gain weight back (I had lost nearly 30 lbs. in the hospital), gain back my muscular strength and mass while swimming enabled me to maintain flexibility and improve my aerobic conditioning

So much so that the 57-year-old heart attack survivor was able to 50x100 @ 1:15 holding a good swimming pace - credit, he strongly believes, to the daily regimen of KAATSU Cycles, a protocol developed by Dr. Sato, cardiologists Dr. Nakajima, Dr. Morita, and their colleagues at the University of Tokyo Hospital years ago.

CAUTION: It is EXTREMELY important to note that Munatones had the benefit of 16 years of mentorship and guidance by experienced cardiologists in the use of KAATSU in Japan before he used KAATSU on himself as a form of cardiac rehab. Patients must discuss this application with their own cardiologists and receive the approval of their own cardiac rehabilitation therapists before attempting this application on themselves.