Working On One Limb At A Time

Above are various KAATSU the original BFR exercises performed by 5-time Olympic medalist Justin Gatlin who did his KAATSU workout together with Dr. Yoshiaki Sato, the KAATSU inventor, at Dr. Sato's office in Tokyo.

Gatlin warmed up with the KAATSU Cycle, both on his arms and legs, while learning his appropriate Base SKU pressure and Optimal SKU training pressure.

Gatlin first wanted to work on his left leg because the timing and firing of his left leg was slower than his right leg. In this case, he first performed several KAATSU Cycles on his left leg only with his appropriate Base pressure of 30 SKU and found his Optimal SKU pressure.

He then untethered the KAATSU connector tubes and did a variety of normal leg exercises with the left KAATSU Air Band on his left leg. Both he and his coach were surprised and happy with the results after Dr. Sato removed the KAATSU Leg BBand.

Gatlin then explained that his arms need to move faster in order to improve. So KAATSU Arm Bands were placed on both arms and his Optimal SKU pressure was found using the standard KAATSU Cycle protocols.

After several KAATSU Cycles where he gradually increased the Optimal SKU pressure, Dr. Sato untethered Gatlin from the KAATSU equipment. Gatlin proceeded to do his standard arm exercises, both with and without the bands on.

His body started to produce Human Growth Hormone, nitric oxide, VEGF (vascular endothelial growth factor), and beta endorphins as his level of CRP (C-reactive protein) started to decrease. All these factors enabled Gatlin to feel better and move his legs and arms as he had hoped. Many athletes describe this sensation as "feeling lighter or smoother - and faster."

Additionally, if increased speed is desired or required, Gatlin and every other athlete can be directed to do several KAATSU Cycles at increasingly higher SKU pressures on the KAATSU Nano or KAATSU Master 2.0 as they do specific movements. Then they can untether the KAATSU Air Bands and do normal training exercises at race pace. "We focus on race pain as opposed to race pace," said Olympic swim coach Chris Morgan. "The athletes train at the speed in which they want to move in competition, but with the KAATSU Air Bands on their limbs, the amount of lactate that builds up in their limbs leads to discomfort - the very kind of discomfort they will feel in competition."

Coach Morgan prefers to focus his athletes on their 'race pain' rather than their race pace. "I want them to experience the discomfort that they will face in a competition. With the KAATSU Air Bands or KAATSU Aqua Bands on, they can almost always get to that feeling. Over time, this helps them improve significantly as they start to be able to engage a greater percentage of their muscle fibers and deliver more blood to the exercising muscle as well as flush out the lactic acid more efficiently."

Elite track club in Florida after their KAATSU workouts. 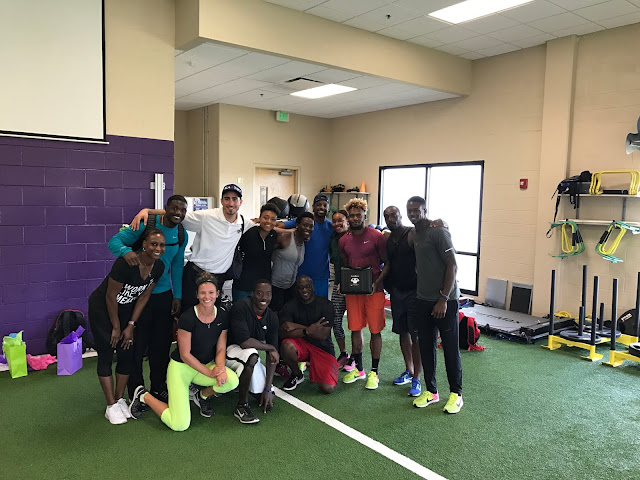 Posted by Steven Munatones at 3:01 PM