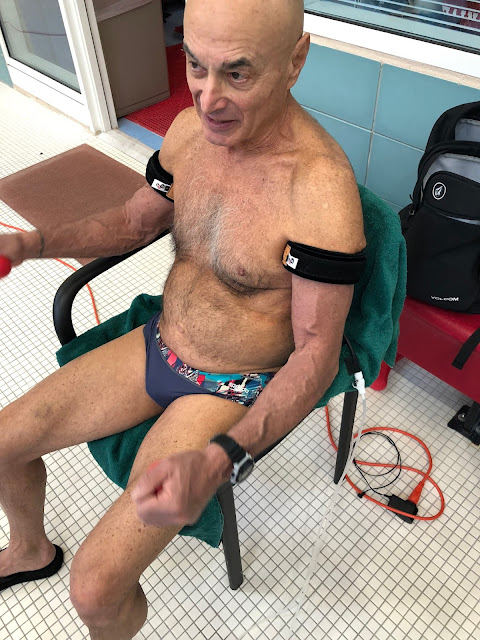 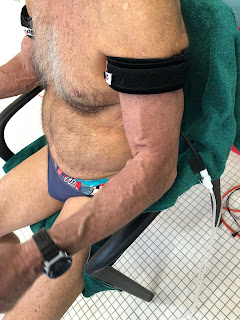 Mike Allcord is an experienced Dive Master at the New England Aquarium who spends a lot of time in the Giant Ocean Tank, a huge tank simulating a Caribbean coral reef where bonnethead sharks, sea turtles, stingrays, moray eels, barracuda, and many smaller reef-living fish reside.

The 77-year-old hardened veteran of the open water is also a blazing fast masters swimmer.

Allcord is coached and was trained on KAATSU the original BFR by Olympic swim coach Chris Morgan at Boston University.

He does the KAATSU Cycle regularly at his appropriate Base SKU and Optimal SKU levels. He recently noticed something that he brought up to Coach Morgan. "I just started kick biking again, since the weather has improved. I noticed that when I grab the handlebar that I have no pain in my hands. Last summer, whenever I kick biked my hands consistentally hurt due to arthritis which had been diagnosed.

Is it possible that KAATSU has caused this pain relief? If it is, that’s truly amazing and a wonderful, unanticipated effect
."

KAATSU inventor Dr. Sato explained the mechanism behind the apparent pain relief that many KAATSU users feel after doing repeated KAATSU Cycle sets while gradually and only incrementally increasing the air pressure in the KAATSU Air Bands.

Along with his colleagues at the University of Tokyo Hospital (cardiologists Dr. Nakajima and Dr. Morita), he said, "We have found that KAATSU Training and the KAATSU Cycle leads to a decrease in CRP, C-reactive protein which is a blood test marker for inflammation in the body. CRP levels increase in response to inflammation.

This is why people who have arthritis or are experiencing different kinds of pain report feeling relief after bouts of KAATSU. While there is also an increase in HGH (Human Growth Hormone), nitric oxide, IGF-1 (insulin growth factor) and VEGF (vascular endothelial growth factor), KAATSU also has shown to decrease CRP.

Typically with pain comes inflammation and the CRP increases. But with KAATSU, the decrease in CRP and production of EPC (endothelial progenitor cell) help. EPC are cells that help regenerate the endothelial lining of your blood vessels and is great for people like Mike


Posted by Steven Munatones at 1:29 PM