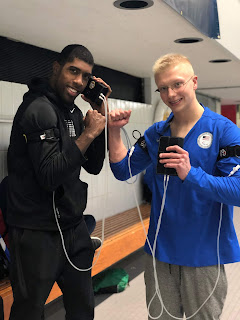 53 athletes were named to the 2020 U.S. Paralympics Swimming National Team, as announced today by the United States Olympic & Paralympic Committee. The team features 33 women and 20 men, including 19 Paralympians and 9 reigning world champions.

“With this being a Paralympic Games year, this is an incredibly important time for our team,” said Queenie Nichols, director of U.S. Paralympics Swimming. “The team just concluded a national team camp which only heightened their excitement for Tokyo 2020. This will be an exciting year, and we can’t wait to get the season started.”

The U.S. Paralympic Team Trials will be held June 25th-28th in Minneapolis, where the athletes who will represent Team USA in Tokyo will be selected. The Paralympic Games Tokyo 2020 will be held August 25th - September 6th.

Every morning before his first workout of the day, Griswold understands the value of doing repeated KAATSU Cycles to warm-up his limbs - and repeating the KAATSU Cycles after the workouts as a recovery modality. Hill similarly frequently uses his KAATSU Cycle 2.0 to help him with warm-ups and recovery.