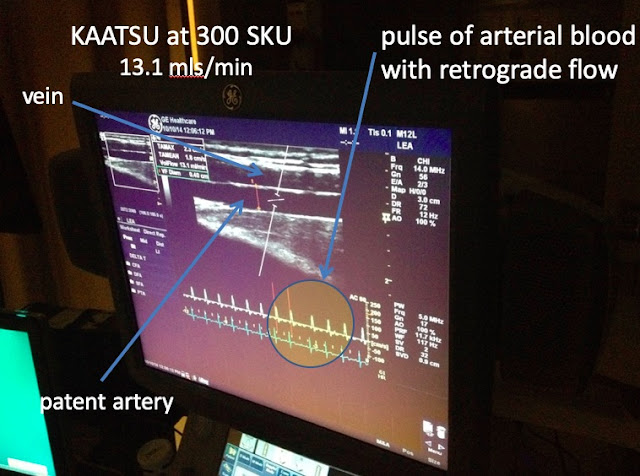 When many people first hear about and become interested in KAATSU, they Google "KAATSU". The resultant Google search often lists many BFR (Blood Flow Restriction) products.

It is reasonable for most of these individuals to equate KAATSU with BFR and vice versa - because KAATSU is the original BFR.

"One way to get around this confusion is to input the Japanese symbols for KAATSU which is 加圧 - or for KAATSU Training which is 加圧トレーニング," advises Steven Munatones. "But inputting Japanese kanji characters on an English keyboard or on their smartphone is difficult or impossible for most people. So the best way to find out correct and non-misleading information about KAATSU is to go directly to the KAATSU website (www.kaatsu-global.com) or blog (www.kaatsublog.com) or any of its social media platforms like Facebook, Twitter or Instagram.

While the information is entirely in Japanese, others can review the original KAATSU website: www.kaatsu.com. Interested consumers can also copy-and-paste 加圧 - or 加圧トレーニング (Japanese for KAATSU Training) into YouTube and there will be plenty of videos and explanations about KAATSU."

Some of the questions that BFR users send into the KAATSU website include the following:

A1. The reason why KAATSU does not use full occlusion as a standard to perform BFR is because we do not believe it is necessary or optimally effective for most individuals. KAATSU equipment was designed based on 10 years of working with hundreds of cardiac rehabilitation patients per year (i.e., those who dealt with strokes, heart attacks, heart bypass surgery) at the University of Tokyo Hospital under the guidance of experienced cardiologists. This is where the KAATSU equipment design and protocols were tested and researched - under the guidance of cardiologists and Dr. Yoshiaki Sato using MRI, ultrasound, and blood analyses with mass spectrometers. After a decade of testing and research comparing everything from partial to full occlusion and various degrees of modifying venous flow, we believe KAATSU equipment and protocols are optimally designed; we based this on thousands of sessions with thousands of subjects (patients) in controlled setting where many parameters were accurately measured, compared and tested. The modification of venous flow does not needs to be extreme [see image above] in order to serve as the catalyst for significant hormonal secretion and metabolite production that is optimal for recovery, rehabilitation and athletic performance.

A2. While some companies make claims or infers its own products are FDA approved, this is not true. KAATSU equipment has also not submitted documentation for FDA clearance, but neither have other BFR companies as of 2019. FDA registration of equipment is not the equivalent of FDA approval. FDA registration is a relatively easy process that does have the same medical, scientific or legal meaning as FDA clearance (or FDA approval in common vernacular).

A3. The Doppler devices that KAATSU used were used during its research phase, but since arterial flow is not occluded and venous flow is only slightly modified, there is absolutely no need for use of a Doppler device with KAATSU equipment. The only time that the Doppler was used was with KAATSU was during the research and testing phase of KAATSU where experienced technicians and cardiologists were studying the effects of KAATSU. In contrast, it is logical that a Doppler device is necessary when there is full occlusion or anything near this degree of pressure with BFR devices. The use of Doppler is necessary in these cases with BFR - when the user is doing easy stretching or vigorous aerobic movements, is an active teenager or a sedentary Baby Boomer, or takes myriad medications. 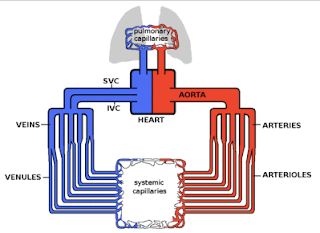 Q4. What is the difference between arterial flow and venous flow?

The heart is the driver of the circulatory system, pumping blood through rhythmic contraction and relaxation. The rate of blood flow out of the heart (often expressed in L/min) is known as the cardiac output.

Blood being pumped out of the heart first enters the aorta, the largest artery of the body.

It then proceeds to divide into smaller and smaller arteries, then into arterioles, and eventually capillaries, where oxygen transfer occurs. The capillaries connect to venules, and the blood then travels back through the network of veins to the right heart. The microcirculation (via the arterioles, capillaries, and venules) constitutes most of the area of the vascular system and is the site of the transfer of O2, glucose, and enzyme substrates into the cells. The venous system returns the de-oxygenated blood to the right heart where it is pumped into the lungs to become oxygenated and CO2 and other gaseous wastes exchanged and expelled during breathing. Blood then returns to the left side of the heart where it begins the process again.

Q5. Wider cuffs are always used with BFR products, but KAATSU uses flexible, elastic, pneumatic thin air bladders that is said to cause nerve damage. Is that true?

A5. That is an absolutely false claim. If the Department of Defense, the Department of Veteran Affairs, many universities and hospitals, and professional and Olympic athletes regularly use KAATSU, there is no possibility of approving KAATSU equipment or using KAATSU protocols if there were any risk of nerve damage - or other misleading claims made by BFR advocates. KAATSU equipment is being used many people over the age of 50 - up to 104 years old. The KAATSU equipment's primary feature is the Cycle mode which automatically shuts off after 4 minutes and allows for deflation every 30 seconds. These protocols are based on the decades of research and testing under the supervision of physicians of various disciplines and researchers with PhD who are under the obligation to report any untoward issue during their KAATSU research.

A6. As with tactical athletes (i.e., soldiers and special operators in the US military), collegiate athletes and professional athletes, we recommend that KAATSU Cycles are repeatedly used both before and after every workout and competition as well as during every workout (as possible). If there is a problem with insomnia or travel that requires crossing time zones, then the KAATSU Cycle is also best used within an hour of bedtime.

The KAATSU Cycle can be used every day whether you are at your home, traveling on business, or heading to a competition. Athletes, corporate executives, special operators in the military, and aging Baby Boomers can use KAATSU effectively no matter where they are: in the office, at home or during travel.

A7. KAATSU equipment changes pressure upon movement by the limb in real time, it changes with hypertrophy, and it changes slightly and gradually every 30 seconds depending on what parameter you set.

Q8. As KAATSU increases the elasticity of the vascular system, muscle tissue tends to build more easily and rapidly regardless of the individual. So how do you perform KAATSU without building excess muscle mass?

A8. Because KAATSU inventor Dr. Sato was a bodybuilder in his youth, building muscle was important to him. Many (or most?) current online references to KAATSU and BFR refer to muscle building, but this one outcome is just one of myriad possible outcomes. Because many young(er) men post information about BFR with the goal of building the muscles of their upper body (note: it is only occasionally about building lower body strength or girth), the Internet is overflowing with BFR experts talking about muscle building with BFR.

But muscle building is only one of the many goals of KAATSU. What can be seen online vis-a-vis KAATSU is very incomplete and only tells a small sliver of KAATSU outcomes. In 1973, Dr. Sato got injured and broke his ankle and he realized the additional - and in many ways - the most important aspects of KAATSU: rehabilitation and recovery.

Rapid rehabilitation from injuries to bones, muscles, ligaments and tendons, and recovery from surgeries and accidents are critical outcomes for many. The use of the KAATSU Cycle is essential to achieving these outcomes.

For injured individuals, the hormonal and metabolite production and improved vascular elasticity are the goals of KAATSU - not muscle-building.

But even with a healthy, young athlete or an older woman recovering from surgery, there is no need for them to build muscle mass with KAATSU if they do not want. KAATSU users can stretch and do specific athletic or therapeutic movements with KAATSU in order to get better - without increasing mass.

They do not need to lift weights or do strength-building exercises with KAATSU - this WILL increase their muscle mass and tone. The KAATSU Cycle enables athletes or those recovering to become more powerful in their movements without the addition of adding muscle mass.

Q9. How do you properly size the KAATSU Air Bands?

A9. Below shows proper sizing of the KAATSU Air Bands for the arms and legs:

You can repeat the KAATSU Cycle of 8 stages as you wish up to 6 times.

Within the G and P levels, there are also L (LOW), M (MEDIUM) and H (HIGH) pressure settings. 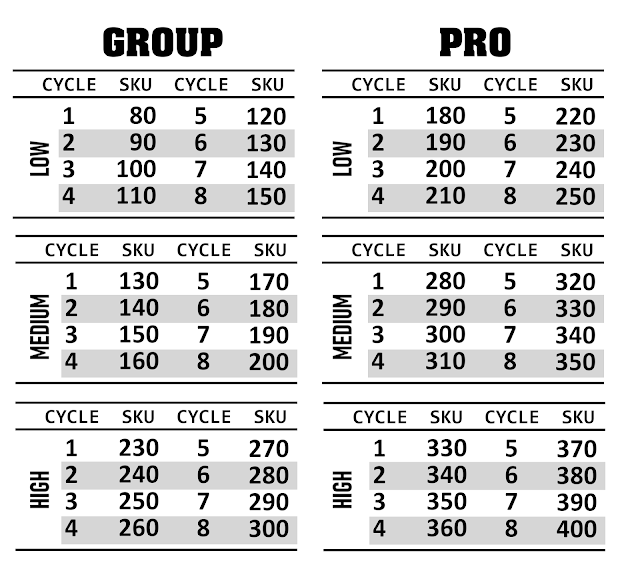 You can repeat the same setting - or increase or decrease the pressure settings as you see fit.

The most highly recommended protocol is to start on GROUP LOW and then proceed gradually upwards on the pressure setting levels. Some users go all the way up to PRO HIGH level, but this level is not for everyone.

Any workout or movements (outside a pool) can be done in the KAATSU Cycle mode.

Q11. What if I would like to do the KAATSU Constant mode?

Q12. How do I switch from the KAATSU Cycle mode to the KAATSU Constant mode - and vice versa?

A12. Put the unit in the neutral position (where neither the GROUP or PRO buttons are lit). Only the center button (ON/OFF button) should be lit. From this neutral position, press the LOW button on the top side of the unit for 3 seconds. The LED display should automatically change from CYCLE to TRAINING.

When you would like to switch back from the KAATSU Training mode to the KAATSU Cycle mode, press the LOW button again when the front face buttons are in the neutral position.

Q13. Can I do KAATSU more than twice per week?

A13. Yes, you can do the KAATSU Cycle mode up to twice daily. The more KAATSU Cycles you do, generally the faster you will rehabilitate and the greater your vascular elasticity will become.