For athletes who play football or fútbol, speed skate or row or cycle, generating powerful leg power and drive are common among elite athletes.

One example of how to do so is using KAATSU the original BFR with KAATSU Air Bands on the upper legs on a slide board. After a few or several sets of KAATSU Cycles, the KAATSU Cycle 2.0 can be detached from the bands and then used in various sets on the slide board - see above. 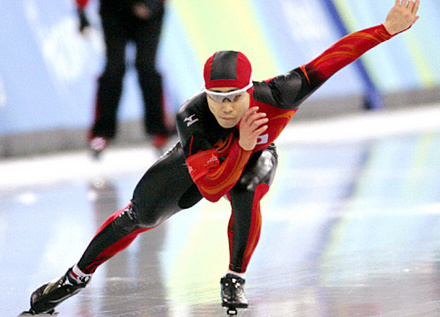 Another intense KAATSU program that Japanese Olympic speed skaters developed for speed and power was used by Hiroyasu Shimizu, a 1998 500m speed skating Olympic champion and 5-time world record holder from Japan. While only 162 cm in height (5'-3"), the power and size of his thighs are renowned.

He used the following 5 basic exercises with KAATSU Air Bands:

Key Points:
* Focus on doing "non-lock exercises" where the knees are never fully extended and the muscles are constantly engaged with the KAATSU Air Bands on.
* Keep the rest period between sets and between exercises to 20 seconds maximum.
* Build the lactate levels to the highest levels possible.
* Do 3-4 sets of each exercise to failure (maximum effort).
* Failure on each set should be reached earlier and earlier (i.e., 24-40 repetitions on the first set in each exercise; >20 reps on second set; >10 reps in his third set; 1-2 reps on fourth set.

Details:
1. SQUATS
Do deep, quick non-lock squats until failure where the knees are kept at less than 90° throughout the 4 sets.

2. LEG CURLS
Do quickly paced leg curls until failure where the legs were kept at less than 90° throughout the 4 sets.

3. LEG LUNGES
Do deep walking leg lunges where athlete "walks" forward with (or without) a bar bell resting on the shoulders (or dumb bells in his hands).

4. CALF RAISES
Do 4 sets of calf raises with weights on the shoulders and toes in a starting position elevated above the heels (i.e., while standing on a small step or a step board) so the calves are worked.

5. SLIDE BOARD
Skate back and forth on a slide board in a deep squat, occasionally with weights resting on his shoulders.