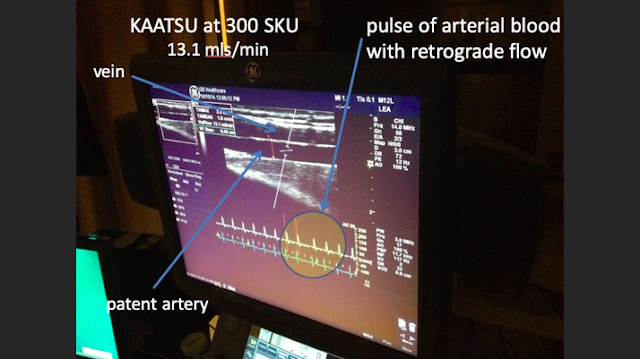 Steven Munatones of KAATSU Global reported, "After reading the published paper, Clinical safety of blood flow-restricted training? A comprehensive review of altered muscle metaboreflex in cardiovascular disease during ischemic, I recall the decade-long research on KAATSU that a team of experienced cardiologists at the University of Tokyo Hospital conducted on over 7,000 cardiac rehab patients between 2004 and 2014.

After 10 years of studying, testing and researching the passive use of KAATSU Cycles and documenting the applications and limitations of KAATSU equipment, it is very clear that BFR equipment and BFR protocols noted in the published literature are significantly different."

In the aforementioned paper, the authors note that "blood flow restriction training (BFRT) requires the inflation of a pneumatic pressure cuff or a tourniquet positioned proximal to the exercising muscle before, and during, the bout of exercise."

KAATSU Difference: KAATSU flexible, narrow pneumatic bands is neither a blood pressure cuff or tourniquet and were never designed or engineered to occlude blood flow. In fact, with the help of a Masimo MightySat Finger Pulse Oximeter, one can easily see how blood flow is never occluded with the KAATSU Air Bands.

"Low-intensity BFRT with resistance training promotes comparable increases in muscle mass and strength observed during high-intensity exercise without blood flow restriction. BFRT has expanded into the clinical research setting as a potential therapeutic approach to treat functionally impaired individuals, such as the elderly, and patients with orthopedic and cardiovascular disease/conditions."

KAATSU Difference: For cardiac rehab patients, only KAATSU Cycles are performed. While BFR refers to sustained constant pressure while trying to build muscle mass, KAATSU Cycles are repeated intermittent inflation and deflation of the bands without a focus on building muscle mass.

"BFRT is a method of exercise training that involves execution of low-intensity resistance exercise combined with blood flow restriction (LIBFR) provided by an inflatable cuff or a tourniquet placed proximal to the exercising muscle."

KAATSU Difference: With the KAATSU Cycle, the limbs do not have to move and exercise is not a requirement or even an expectation for cardiac rehab patients doing KAATSU.

"In general, the external cuff pressure applied is set relative to the arterial occlusion pressure (AOP; i.e., the pressure required to cease blood flow to a limb), which is sufficient to produce partial restriction of arterial inflow and full occlusion of venous outflow."

KAATSU Difference: The pressure of the KAATSU Air Bands are not related to or dependent upon the arterial occlusion pressure. Most definitely, the full occlusion of venous outflow and the partial restriction of arterial information are not neither the goals of KAATSU nor part of its applications and protocols.

"A large survey in Japan with BFRT [note: authors refer to KAATSU Specialists] instructors from 232 facilities did not verify any major event, such as cerebral hemorrhage, cerebral infarct, or thrombosis in 120,000 subjects with a large variability of demographical and clinical characteristics (e.g., older adults and people with obesity, diabetes, cerebrovascular and cardiovascular diseases). Reported side effects were generally minor, including transient numbness or dizziness, subcutaneous hemorrhage, and itchiness."

KAATSU Difference: This survey of Japanese KAATSU Specialists is accurate ("Use and safety of KAATSU training: Results of a national survey"); however, none of the Japanese instructors had access to the currently available automated KAATSU Cycle function of the KAATSU Master 2.0, KAATSU Nano and KAATSU Cycle 2.0 units. The survey was conducted in Japan over 15 years ago before the current-generation equipment was developed. In 2014 as a result of the decade-long study, KAATSU Global only sells equipment with the automated KAATSU Cycle function.

In the case of transient numbness or dizziness, the KAATSU Air Bands should be immediately removed and the patients should be well hydrated before and only do the automated KAATSU Cycles. In the case of subcutaneous hemorrhage and itchiness, the KAATSU Air Bands should be removed and reapplied at a lower pressure. For these reasons and others, KAATSU tightness (pressure) is never a function of AOP.

"However, care should be taken with general assumptions about BFRT safety given the paucity of long-term prospective trials with clinical populations, and the possibility of some remaining adverse effects that are still largely overlooked in the literature."