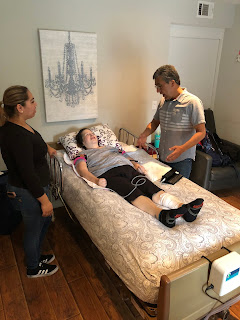 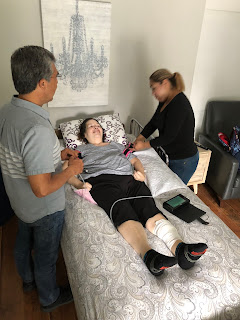 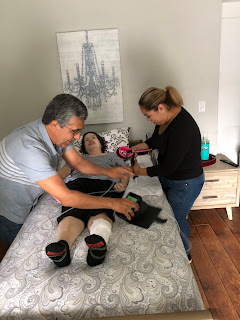 Brain injury survivors, wounded warriors, and diving, climbing, biking and car accident victims use KAATSU on all four limbs in order to aid their recovery and rehabilitation.

They follow all the standard protocols and Do's and Don'ts of KAATSU, but are also encouraged to focus on Progressive KAATSU Cycles. That is, they should start off very conservatively (i.e., low SKU pressure) while they get comfortable in position. This may require them to add pillows to different places on their bed or chair, or to change their body or limb positions. There is no rush and the more comfortable they are, they more benefit they will feel.

Progressive KAATSU Cycles are absolutely essential for success. The vascular tissue needs to be very, very, very gradually worked on. Starting with very low SKU pressures and then slowly increasing incrementally is the most effective and efficient way to increase the elasticity of your vascular tissue. For example, on the KAATSU C3, users can start on the LOW pressure several times and then gradually move to the MEDIUM pressure. Some users even go lower than the LOW SKU settings and use the CUSTOM mode.

The Progressive KAATSU Cycles should also always start on your arms and while you are very well hydrated.

The KAATSU session can include, in order:

Various movements - or no movement at all - are up to your discretion. It could be as simple of Standard KAATSU 3-Point Exercises (e.g., Hand Clenches, Biceps Curls, Triceps Extensions, Toe Curls) or other movements (e.g., Head or Foot Rotations, Balancing on One Foot, Stretching, Walking, Standing Up and Sitting Down, Handwriting). But it is very important avoid any painful movements or any sudden movements. KAATSU is best done with slow, easy, gentle movements. You can think of KAATSU as slow stretching of the muscular and connective tissue.

You can also use other modalities and therapy in conjunction with or before or after KAATSU including acupressure, electric muscle stim therapy, aqua therapy, etc. 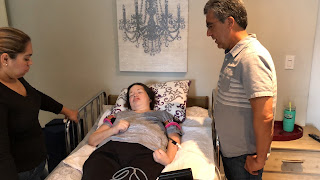 1. When people have been bedridden for long periods and try KAATSU, they often say they have a feeling of warmth which is an indication of improved blood circulation.

2. When people have been bedridden for long periods and try KAATSU, they often sleep much better, especially if KAATSU Cycles are gently performed closer to bedtime.

3. Caregivers are also under stress, both physically and mentally. They can use the KAATSU equipment and follow the standard KAATSU protocols if they have a sore back or fatigued muscles.

4. After regular daily use of KAATSU Cycles, the color of your skin should turn from light pink to rosy pink to light red to a beefy red over time. This is an indication of healthier, most elastic vascular tissue of your surface capillaries.

5. Occasionally, a bedridden user will have cuts or lacerations that stubbornly do not heal. The length, width and depth of the cuts will gradually improve with regular daily use of KAATSU Cycles.

A caregiver to a quadriplegic explains the differences she has seen in her hands since starting KAATSU:

Dr. Yoshiaki Sato explained about KAATSU usage with, by, and for people with paralysis:

Q1. Why does a patient with paralysis become more relaxed and sleep better after doing KAATSU?

Q2. What is the mechanism that enables an increased passive range of motion in her elbows, hands, and ankles?

A2. After the accident, joints became harden and spastic [for a long time, decades]. The tendons and ligaments become harden. Relaxed by KAATSU, because the sympathetic and parasympathetic nervous system are well activated, the joints and muscles become loosened. This increases its range of motion. There are tendons within the muscles, but they will not become soft soon. Over time, however, the tendons gradually softens over the course of many months.

Q3. The muscle and ligament contractures in their elbows, wrists, fingers and ankle plantar flexors are rigid. Can you predict how much a patient with paralysis can improve her range of motion?

A3. Patients with paralysis have been tense for a long time and their bodies became stiff as a result. It is very important to make concentrated efforts just like climbing stairs, step by step. They should not be impatient. Movement towards their goals might go in a good direction if they keep making steady effort.

Q5. There are some red spots that showed up on a quadriplegic’s right thigh after the initial session. Was the Base SKU too high initially?

A5. You can judge that the patient's blood vessels are weak due to the appearance of red spots on the skin. Perhaps next time, when KAATSU is applied with the same SKU, these tiny red specks might disappear. Some people might say that KAATSU is dangerous because the red spots appeared or KAATSU might cause blood clots. The red spots indicates that stimulation was sufficiently given to blood vessels. It is important to start with KAATSU Cycle 1 (i.e., 100 SKU) for people who are trying KAATSU for the first time and gradually move on to KAATSU Cycle 2 (e.g., 120 SKU), Cycle 3 and on.

Q6. Should we worry about blood clots in immobile patients? Does the potential for existing clots change KAATSU protocols?

A6. The potential for kicking off blood clots will not change as long as you do the KAATSU Cycle. Start with pressurization for 30 seconds and depressurization for 5 seconds (i.e., KAATSU Cycle on and then off). Since the blood vessels gradually increase resistance against pressure and patient's blood vessels get used to SKU and can tolerate it. Do not worry about thrombosis.

Q7. If patients eat poorly, what should we worry about with KAATSU?

A7. Improving one’s diet in parallel with doing KAATSU is one kind of treatment. The three goals - exercise, good diet and sufficient sleep are important to become healthier. It is necessary to balance these three factors.

A8. The daily usage of KAATSU varies according to patient's abilities and their level of physical fitness. In the case of patients where spasticity tends to easily occur, even if their body loosens after one KAATSU session, it is possible that they will return to their original state after a few minutes. Rather than deciding whether to do one or two KAATSU Cycles, the amount of KAATSU should be decided by the patient. Generally, the more serious the patient, the more times they should do the KAATSU Cycle. Conversely, for less serious patients, the less time should be spent doing KAATSU. That is, the number of times doing KAATSU Cycles should be decided on a case-by-case basis.

Q9. Why do patients with spinal cord injuries feel warm during KAATSU - especially when they have no sensation in the same limb?

A9. The fact that their body feels warm after KAATSU is evidence that new blood vessels were created. Normally, there is no medical treatment to create new blood vessels instantly, but KAATSU instantly creates new capillaries. Blood flows to those points in the body and their body warms up. Conversely, when the body is exposed to below the freezing temperatures, capillaries are pulled away and the body becomes cold.

Q10. Why does KAATSU appear to help with neuropathic pain in spinal cord injury patients?

A10. For not only the patients with spinal injuries, but also the patients with various diseases, when they do KAATSU, cells and muscle fibers that have not been used until now start to work. Consider the case if there are 100 soldiers, but only 10 of them have been working. When those 10 soldiers are injured, the 90 other soldiers will start working on behalf of those 10 people.

A11. KAATSU immediately creates new blood vessels and the blood fills the place where no blood was flowing until then. Naturally, the perfusion index will increase in this case.

Q12. For spinal cord injury patients, Capillary Refill Time is often very slow with no KAATSU pressure, and speeds up during KAATSU. Why?

A12. Since the blood flow reaches every corner [in the limb], Capillary Refill Time is accelerated. New blood vessels are increased. When you do KAATSU, VEGF (Vascular endothelial growth factor) new blood vessel growth factor hormone increases. KAATSU effects have continued to surprise me.

Q13. If neural pathways are NOT intact (for example, with a completely severed spinal cord) for an individual with a spinal cord injury, why does the client still feel pain? Why does KAATSU appear to decrease that pain?

Q14. Many military therapists use electrical muscle stimulation on spinal cord injury patients. Can this Electrical Muscle Stimulation device be combined with KAATSU to achieve better results during the isometric contractions?

Posted by Steven Munatones at 12:26 PM