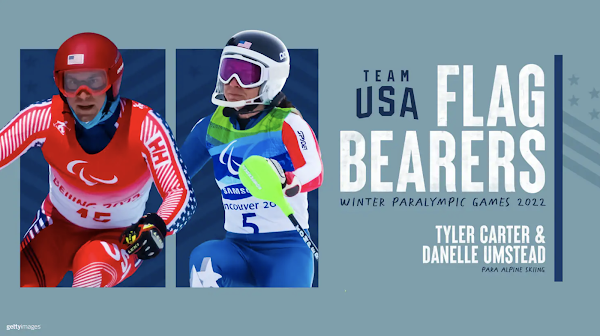 Paralympic alpine skiing teammates Danelle Umstead and Tyler Carter were selected as the U.S. flag bearers for the Opening Ceremony of the Paralympic Winter Games Beijing 2022.

Umstead will be joined by husband Rob who also acts as her guide.

The Opening Ceremony of the the Paralympic Winter Games will be held March 4th at the National Stadium in Beijing.

The only married couple on the team, Danelle and Rob Umstead have been competitively skiing together since 2008. Umstead is one of three four-time Paralympians on the 2022 U.S. Winter Paralympic Team.

“I was completely surprised,” said Umstead on being selected by her fellow U.S. teammates. “They did a beautiful thing, and they had my husband tell me. Everything I have done, he has been by my side. He is so proud. This is such an honor, and I was completely shocked.”

"Getting to carry the flag alongside Danelle is a huge honor,” Carter continued. “I lived with her for a few months when I was young in my career. She mentored me, and we became best friends. To be able to walk alongside her [and] represent our whole country and the team, I can’t think of anyone better to be sharing that moment with.”