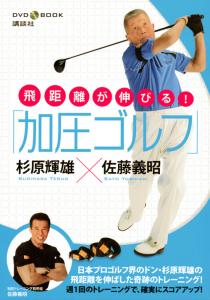 Former Japanese golf professional Teruo Sugihara (Japanese: 杉原輝雄) passed away at the age of 74. Sugihara was one of the first professional athletes in Japan to transform his career later in life by incorporating KAATSU into his training and recovery.

Sugihara won 63 tournaments over the course of his career and played professionally in Japan even after his diagnosis of prostate cancer in 1997. In 2006, at age 68, he became the oldest player to make the cut in a top-tier Japanese tour event.

There were many valuable lessons in his innovative use of KAATSU that he has shared with golfers of any age, but especially with older golfers.

Older golfers can use KAATSU with the following protocols:

4. The Base SKU pressure should be high enough to slightly reduce venous flow, but not high enough to restrict arterial flow. That is, the KAATSU Air Bands should be snugly applied to the limbs so a finger cannot be slipped between the bands and the arms (or legs). The palm of the hand with the band will subsequently turn slightly pink or give the appearance of a rosy color compared to the palm on the hand without the band. This is due to the increased engorgement of blood in the capillaries.

5. In addition to the coloration of the palms, the maintenance of the arterial flow can be confirmed by the Masimo MightySat Finger Pulse Oximeter. The pulse rate and SpO2 is shown on the face of the Masimo device [see photo below where a women in her 60s with the KAATSU Air Bands at 280 SKU shows a real-time pulse rate of 72 beats per minute and SpO2 of 100%]. It is also normal that veins are distended [see photo below]. 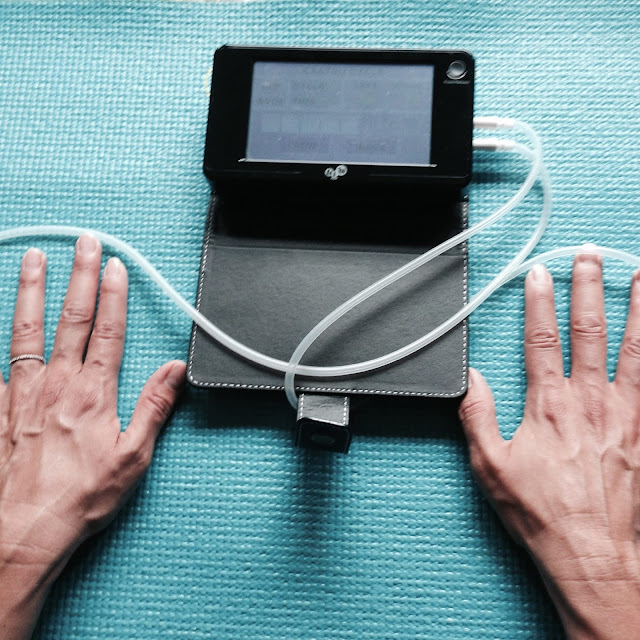 6. The KAATSU Cycle mode should start conservatively (i.e., with a lower Optimal SKU pressure) on the first Cycle and then can be gradually increased on the second and subsequent Cycles (e.g., 100 SKU on the first Cycle followed by 140 SKU on the second Cycle, 180 SKU on the third Cycle, and 220 SKU on the fourth Cycle). At all times, the coloration should be at least maintained, and usually becomes a deeper hue or more red. This coloration transformation is due to increased engorgement of blood in the capillaries and veins. 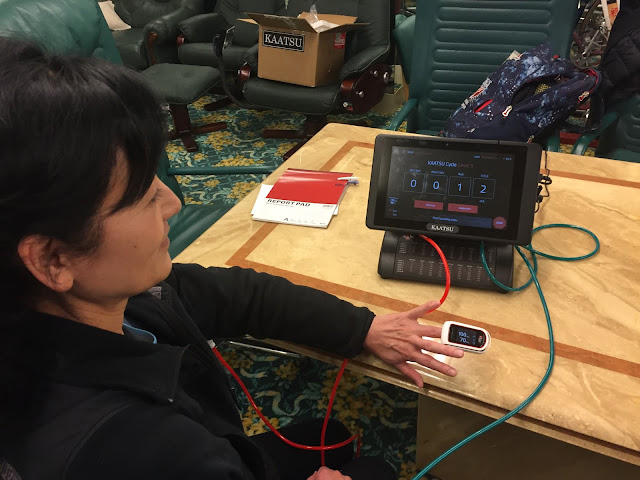 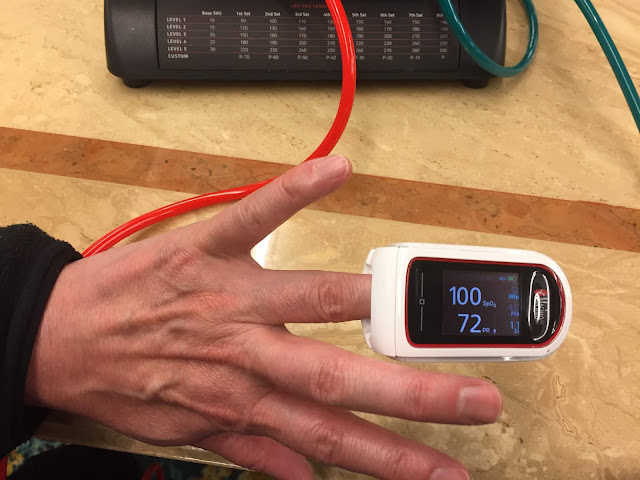 7. If the user feels uncomfortable or lightheaded at any time, the bands should be immediately removed. Alternatively, on the KAATSU Master 2.0, the data settings for automatic shutdown can be set to any specific SpO2 or pulse rate. However, use of the KAATSU Cycle has shown over millions of KAATSU sessions that this mode comfortable and appropriate for users of all ages and backgrounds.

8. During the 3-4 KAATSU Cycles, the KAATSU 3-Point Exercises can be done:

That is, when the bands are inflated, the user can do these various movements listed above in order.

9. After the KAATSU Cycles are over, the user can then move right into their KAATSU functional movements of choice (e.g., swinging a club using a putter or driver) or stretching.

10. If functional movements are not possible due to injury or disability, the KAATSU 3-Point Exercises can be used for rehabilitative or recovery.

11. After the KAATSU Cycles and exercises are completed on the arms, then remove the bands from the arms and place the bands on the legs.

12. Do KAATSU Cycles on the legs and then KAATSU functional movements of choice with the bands on the legs.

Posted by Steven Munatones at 6:01 PM