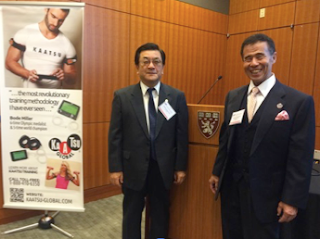 Sarcopenia is the loss of muscle mass and is a major problem especially among older individuals.

Among both males and females, muscle strength decreases with age and muscle volume quickly decreases (0.45 kg per year) as individuals age past 50 years old. That is, fast twitch muscle fiber decreases on average to 50% by the age of 80 years.

To prevent it, physicians and physiologists understand that high-intensity resistance exercise (e.g., weight training or body weight exercises) is required. But this type of training is usually not possible - or desired - by the elderly.

But with KAATSU, individuals up to the age of 104 [see below] can perform low-load or no-load, non-impact exercise with KAATSU equipment following the KAATSU Cycle modality to induce muscle hypertrophy and strengthen muscle even with short-term, low-intensity exercise. With the KAATSU Air Bands or KAATSU Aqua Bands, the KAATSU no-load, non-impact exercise physiologically and safely equals high-intensity, high-load training. In both cases (KAATSU and high-intensity, high-load training) the muscle and brain are stimulated to induce muscle hypertrophy and strength including fast twitch muscle fibers.

Elderly KAATSU users are strongly recommended to use repeated (3-6) KAATSU Cycles on first their arms and then subsequently on their legs. Ideally, this is done sometime in the morning or afternoon. Users can then do a few KAATSU Cycles on either their arms and/or legs during the evening hours, optimally less than hour before bedtime.

The KAATSU Master 2.0 is the next-generation device to be used safely and effectively by users over the age of 50 years. 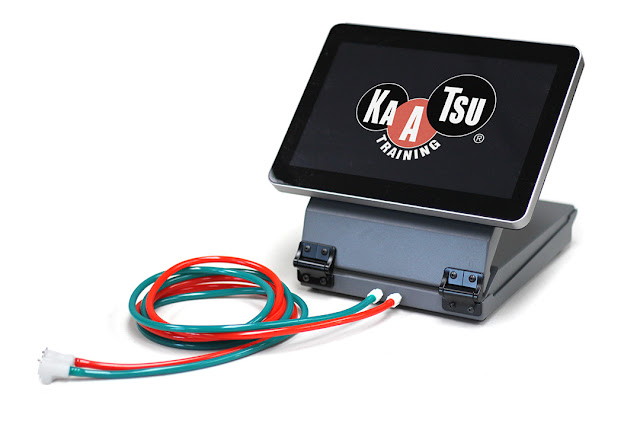 There are 5 general levels of pressure (Levels 1 - 5) that are increasingly higher, but are based on decades of use by elderly patients in Japan and are judged safe by Japanese cardiologist.

Dr. Nakajima reported the significant increase in cross sectional area of thigh with MRI in the Scandinavian Journal of Medicine & Science in Sports (2014 Oct;24(5):799-806). He also explained how the increase in muscle strength and mass leads to improvement of life function tests like getting up and out of a chair or bed.

Similar results were realized in the arms (biceps and triceps) among the group of elderly patients [see before-and-after effects of a 71-year-old subject on left].

To prevent this, resistance exercise, an established and potent stimulus for enhancing muscle protein synthesis and subsequent muscle hypertrophy, is traditionally used.

Conversely, skeletal muscle is a plastic organ that adapts its mass to the different conditions by affecting pathways that regulate protein and cellular turnover. Repetitive KAATSU appears to be a novel stimulus for skeletal muscle to induce a net positive protein balance and prevent atrophy especially with patients with orthopedic diseases or injuries or those with disuse syndrome, sarcopenia and cachexia (weakness and wasting of the body due to severe chronic illness)

The video below shows the before-and-after effects of KAATSU Cycle on a 104-year-old female.

Visionary physicians like Dr. Sato and Dr. Nakajima are leading the way on how best to utilize KAATSU to combat sarcopenia (loss of muscle tissue as a natural part of the aging process) while addressing a host of other wellness and health issues. For example, 104-year-old female patient in Kawasaki, Japan shows what is possible with KAATSU under the guidance of her physician Dr. Odagiri and Dr. Sato.

The patient was bedridden and uncommunicative for two months with severe dementia. She was transferred from her local hospital to Odagiri Hospital where she was treated with KAATSU. Initially for the first month, she simply did KAATSU Cycle as she remained in bed. Gradually, she became communicative and was able to get out of bed. Eventually, over the course of two months, she was able to do a variety of exercises and found herself wishing to live to be 200 years old [see English translation in video above].

During the Japanese-language video, she was asked how old she is and she answers as 104, holding a document confirming her age and birth date. She is shown doing a variety of exercises with her KAATSU Air Bands on (at an Optimal SKU level of 120).

For a brief explanation of the mechanisms involved in doing KAATSU among elderly patients, visit here.

Posted by Steven Munatones at 6:26 PM