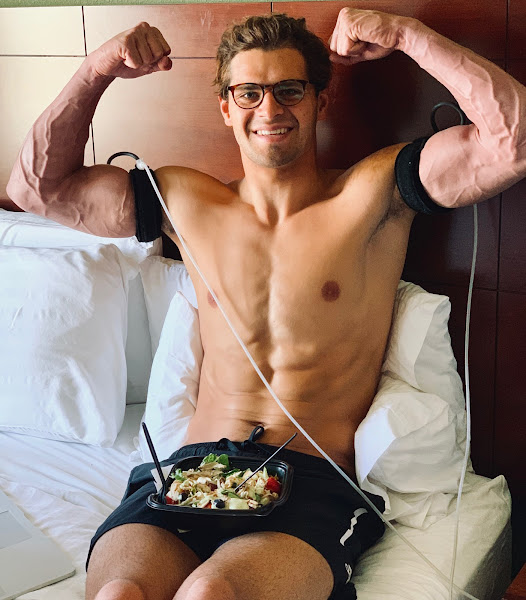 Michael Andrew has been living the American dream for a number of years already.

Now in this postponed Tokyo Olympic year, one of the most visible and popular swimmers on the planet, is on the verge of living his Olympic dream.

Michael and his family, coach-father Peter, mother-manager Tina, and younger sister Michaela have road tripped to swim meets across the country - and now they often travel internationally as the 21-year-old Michael has developed into one of the fastest swimmers on the planet.

Michael, a 2016 world champion and 2018 Pan Pacific champion, specializes in the 200m individual medley, 100m breaststroke and 50m freestyle. He is renowned for his innovative training methods and currently serves as the vice-captain for the New York Breakers in the International Swimming League.

Michael and Peter have spent years identifying, testing, and using the most innovative and convenient modalities to train effectively and recover efficiently. Their aim has been to utilize an array of cutting-edge technologies that enable Michael to constantly improve - which he has achieved.

One of the technologies that Michael has used for the last few years is KAATSU and KAATSU Aqua, both in the pool for speed and strength and on dryland for recovery, especially before and after his grueling training sessions and during competitions. Michael originally used the KAATSU Nano and KAATSU Cycle 2.0, but now uses the KAATSU C3, portable, handheld devices that are conveniently used at home, in the pool, at the gym, on an airplane, and in hotel rooms during his away meets and travel. 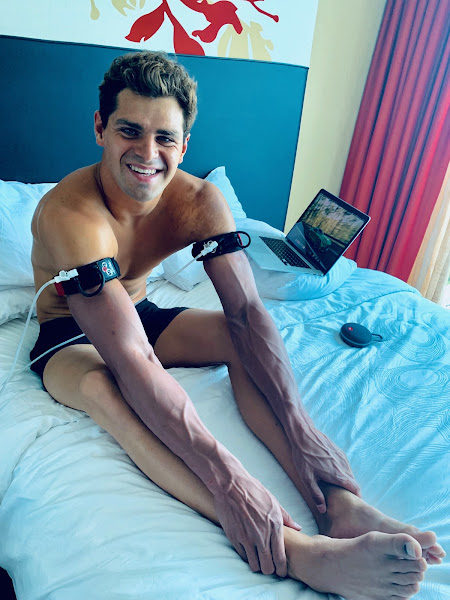 Steven Munatones, a former USA Swimming national team coach, explains, "Michael uses KAATSU and KAATSU Aqua similarly to applications used by Navy SEALs, professional athletes in the NFL, NBA, MLB, NHL, and MLS, and Olympians from track & field to rugby. KAATSU can be used to build strength, improve stamina, increase speed, and range of motion. But its most convenient application is, frankly, recovery after intense workouts and between races during multi-day competitions - like the Olympics will be [see here and here].

KAATSU and KAATSU Aqua works because it naturally increases the elasticity of the vascular tissue throughout our bodies with a significant release of hormones and metabolites. Capillaries and veins are ubiquitous throughout our bodies. If these capillaries and veins were laid end-to-end, the collective length would circle the globe more than two times.

With KAATSU equipment, our capillaries and veins are naturally made more elastic and resilient. Even slight movement of our limb is a catalyst for a hormonal response. So, for example, just sitting down in the bleachers and playing on your phone with the KAATSU bands is sufficient to help efficiently remove lactate after a race. This is what Michael has discovered – the same thing that other professional and tactical athletes have long known.

One example of his innovative use of KAATSU was when Michael had three big swims in 47 minutes at the FINA World Junior Championships [see here]. There was not enough time to do a normal warm-down, go to the awards ceremony, and return to the blocks with that kind of schedule. So his recovery relied on his handy KAATSU equipment.

Michael was the first world-class athlete – anywhere – to use the new KAATSU C3, the third generation KAATSU equipment that will be released in April. This device was developed with input from Navy SEALs and Olympic athletes. The KAATSU C3 includes customizable functions that are well-suited and invaluable to give athletes that competitive edge.”

Prior to the Tokyo Olympics, Michael will also be the first in the world to use the KAATSU B1, a next-generation device that not only works with the KAATSUfit app on smartphones, but also incorporates the functions of the Masimo MightySATTM Finger Pulse Oximeter [see here], another leading technology that Michael utilizes.

KAATSU was invented in Japan in 1966 and is the world’s leading automated BFR system for exercise, rehabilitation, and recovery. The patented pneumatic bands and algorithms improve blood circulation in the arms and legs which results in a natural cascade of physiological effects and significant hormonal release. The proprietary technology is supported by decades of research at top academic institutions from the University of Tokyo Hospital to Harvard Medical School as well as hundreds of peer-reviewed published studies. 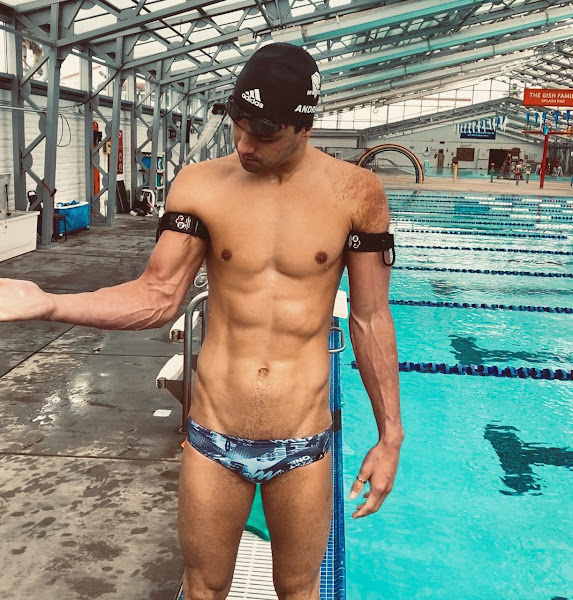 Michael has used the original KAATSU Master, KAATSU Nano, and KAATSU Cycle 2.0 to date. The pneumatic KAATSU Bands are interchangeably used with any of the KAATSU devices.

He will start using the KAATSU C3 in April and the KAATSU B1 later in July, with KAATSU AI later. Other swimmers can learn about and tap into the same technology and protocols by visiting www.kaatsu.com or downloading the KAATSUfit app on iOS and Android.

Use discount code SWIMMERMICHAEL for US$50 off on the KAATSU C3 and KAATSU B1 products - good until July 23th, the Tokyo Olympics Opening Ceremonies.

Learn more about KAATSU and purchase here with US$50 discount code SWIMMERMICHAEL.

To support Andrew's focus on the 2020 Tokyo Olympic Games and beyond, use SWIMMERMICHAEL code to purchase KAATSU equipment at www.kaatsuglobal.com.