So not only can muscle mass be maintained in space flight, but also the blood circulation continues as it normally does in the upright position while on Earth. On a practical basis, use of KAATSU can help maintain the health and wellness of astronauts, but the short and efficient KAATSU sessions can also enable more research time for experiments and important research.

Muscle mass and bone denisty are normally decreased in space. But to prevent this, astronauts exercise on fixed equipment in the International Space Station at least six times per week for hours. In order to decrease the exercise time and increase the scientific work time in an effective, low-cost manner, the Japan Manned Space Systems Corporation worked with Dr. Sato and his KAATSU scientific collaborators to produce prototype KAATSU space equipment in 2006.

"But now with Elon Musk with SpaceX and Jeff Bezos with Blue Origin exploring and moving quickly to expand colonies and civilization to other planets, the issue of muscle mass and bone density maintenance becomes even more important," says Steven Munatones. "Now KAATSU is not only a reasonable solution for human health for space travel, but also what happens to the human body during short- or long-term colonization on planets with significantly less gravitational pull like the moon and Mars? This is where the application of KAATSU is an extremely low-cost, highly effective, highly efficient, portable, extremely small-scale solution to the human physiological issues of space travel and space colonization."

In their report, Dr. Strangman notes, "In a handful of astronauts, elevated ICP has been found days or months post‐flight (measured by lumbar puncture). This visual impairment and intracranial pressure (VIIP) condition varies notably across astronauts.

To date, no countermeasures have been tested for VIIP, although two countermeasures have been utilized in spaceflight to mitigate in‐flight cephalad fluid shifts (and related cardiovascular changes): (1) Russian‐made Braslet thigh cuffs, and (2) lower‐body negative pressure (LBNP). Both help redistribute blood from the upper body into the lower extremities, for a more Earth‐equivalent fluid distribution. Both have operational challenges, including availability, obtrusiveness, and calibration."

So they studied and tested KAATSU the original BFR, the first in space.

His explanation is posted above. 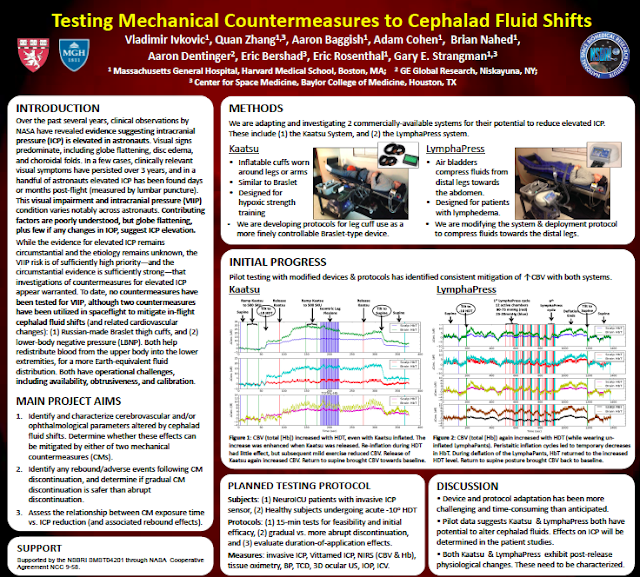